Obama at Pentagon for Update on Anti-IS Campaign 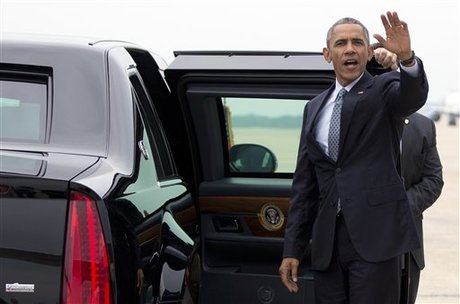 U.S. President Barack Obama was to visit the Pentagon on Monday for an update on the campaign against the Islamic State group in Iraq and Syria.

The briefing on U.S.-led efforts to dismantle the jihadist group follows coalition air strikes that hit its de facto capital Raqa in Syria over the weekend.

Obama was to deliver a statement to the media after his Pentagon briefing by members of his national security team.

The announcement of the air strikes came after the IS group released a video showing teenage members executing 25 Syrian soldiers in an amphitheater in the ancient ruins of Palmyra.

Speaking ahead of the Obama briefing, U.S. Secretary of Defense Ashton Carter told journalists that the weekend's strikes were not aimed at particular IS figures, but were part of an effort to help Kurdish forces and "limit ISIL (IS) freedom of movement."

"It's the success on the ground of the Kurds that explains (the bombardments) of the last few days," Carter said. "The opportunities we were pursuing ... were specific tactical opportunities, they were not individuals per se."

The Britain-based Syrian Observatory for Human Rights has said the raids killed at least 30 people, among them six civilians including a child.

Kurdish forces have in recent months been involved in heavy fighting against the Islamic State group.

More than a year after Islamic State fighters overran much of Iraq, the United States and its allies are struggling to turn the tide against the extremists in an air campaign known as Operation Inherent Resolve.

The average daily price tag is $9.2 million and the campaign had cost $2.91 billion as of June 18, according to the Defense Department.

Carter is due to testify in front of the Senate Armed Services Committee on Tuesday to discuss the campaign, which has come under renewed criticism from U.S. lawmakers.

The Pentagon last month said it was sending 450 additional U.S. troops to act as advisers to help Iraqi forces seize back control of the western city of Ramadi from jihadist fighters.