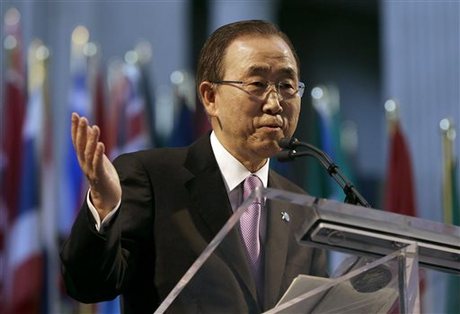 U.N. chief Ban Ki-moon has expressed his deep concern over the ongoing vacuum at Lebanon's presidential palace, urging all parties to help the government function, An Nahar daily reported on Wednesday.

In his semi-annual report on the implementation of U.N. Security Council Resolution 1701, Ban said the vacuum at Baabda Palace continues to limit Lebanon’s capabilities in confronting security, economic and social challenges.

U.N. Special Coordinator for Lebanon Sigrid Kaag traveled to New York on Tuesday to brief the Security Council on the report. But An Nahar said that it received a copy of it before it was officially released by the U.N.

In the report, Ban hailed Prime Minister Tammam Salam for holding onto the unity of his cabinet.

He urged all parties to work constructively so that the government can function effectively.

The U.N. Secretary-General also urged all Lebanese leaderships to commit to the Constitution and the Taef Accord.

He said the continued boycott of parliamentary sessions by some blocs hampers Lebanon's democratic tradition.

Ban urged lawmakers to assume their responsibilities and head to parliament to elect a new president.

The report also condemned the participating of Lebanese citizens in the Syrian conflict, in clear violation of the government's dissociation policy and the Baabda Declaration.

He said Lebanese parties should back off from any involvement in Syria's war in accordance with their commitment to the dissociation policy.

The report also touched on the situation in southern Lebanon.

Resolution 1701, which ended the Hizbullah-Israel war in 2006, expanded the mandate of U.N. troops in the South, which was originally formed in 1978 after the outbreak of Lebanon's 1975-1990 civil war.

It imposed a strict embargo on weapons destined for Lebanese or foreign militias in Lebanon, and pressed Israel to end violations of Lebanon's airspace and to withdraw from northern Ghajar.

One man destroying the institutions in Lebanon and serving the goals of Ebola.