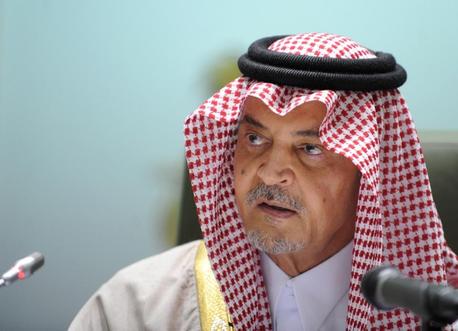 Prince Saud oversaw four decades of diplomacy for the world's biggest oil exporter before he retired in April for health reasons.

A statement from the Royal Court just before midnight said the prince, who was born in 1940 and became one of the highest profile members of the kingdom's ruling elite, died Thursday in the United States. It did not give a cause of death.

The funeral will be held on Saturday in the Muslim holy city of Mecca, where his brother Prince Khaled is governor, the Royal Court said.

Top officials in the kingdom's longtime ally Washington said Saud would be missed.

"He was committed to the importance of the US-Saudi relationship and the pursuit of stability and security in the Middle East and beyond, and his legacy will be remembered around the world."

Citing statements from Saud's counterparts in the United Arab Emirates and Kuwait, as well as Sheikh Ahmed al-Tayyeb, the head of Egypt's Al-Azhar, the agency said officials paid tribute to a "man of peace, (a) balanced and moderate thinker."

British Prime Minister David Cameron said he and others had benefited from Saud's "great wisdom in international affairs over his long years of service".

The goateed prince oversaw Saudi Arabia's emergence as a major diplomatic player, and had to deal with regional turmoil including civil war in Lebanon, and the 1991 Gulf War in which U.S.-led forces used Saudi Arabia as a launchpad.

He maintained a focus on relations with the West, but ties with Washington were sometimes strained, including after the September 11, 2001 attacks on the U.S., in which 15 of 19 plane hijackers were Saudi.

Saud served under four monarchs, and took his final oath of office in March after King Salman acceded to the throne following the death of king Abdullah, when Saud was in the U.S. for back surgery.

His back troubles forced him to drop his hobbies of driving cars and taking desert trips.

He was first named top diplomat in October 1975, seven months after his father, King Faisal, was assassinated by a nephew.

Another of Saud's brothers, Prince Turki, was a longtime intelligence chief who served briefly as ambassador to Washington.

Upon his retirement, Saud was replaced as foreign minister by Washington ambassador Adel al-Jubeir, reflecting a shift to a younger generation of Saudi leaders.

This is your theory as propagated by your hatred for him. But bringing down the US Embassy in Beirut killing over 70 civilians is done by your HA and is a fact.

But the illiterate won't be speaking French

So Justine TimberBall
you have something smart to say?

helicopter, your pro western/wahabi propaganda is sickening. Everybody knows that the American Embassy in Beirut was filled up with CIA agents during the war.

William Buckley the mastermind of CIA in Lebanon, admitted that they used the U.S embassy in Beirut as the CIA headquarters.

texas, that was a lesson to all Americans. That they could never rule Lebanon any longer.

just update your CD.... the Taliban and your country of origin Iran are best friends now. Taliban opened an office in Tehran.

First Point you are Saying now which means that it wasn't the case before and acknowledge the past mistakes about Talibans and Saud Ben Faycal
And if you read the link I pasted which comes from a right hand newspaper called le Figaro, you cannot accuse it to be houthi not Iranian
But Justine ... We can accuse you to be a Dhimi

"March 14 forces general-secretariat coordinator Fares Souaid to VDL (93.3): A delegation of March 14 alliance will visit the Gcarand Serail in the afternoon to express support to PM Salam and the government"
.
the March 14 forces are the great supporters of the Cristhian Genocide in the region like the Saudi diplomatic-militar strategy...the Pope call of what is happenning to the Cristhians in region Genocide! Great General Aoun, the Cristhianity are in Dangeur in the words of the Vatican! thanks Lebanon militar inteligence for support the Cristhian Genocide in the Region...

another great friend of Mecca militar-diplomacy for the region, Suleiman...
.
"Suleiman after meeting Salam: Obstructing the presidency does not serve Christians."
.
Suleiman, your Presidency do not served the Cristhians interests...and we can see that by see what is happenning to the Cristhians in the region!

this is why isis never attacks iran huh

"He was committed to the importance of the US-Saudi relationship and the pursuit of stability and security in the Middle East and beyond, and his legacy will be remembered around the world."...Yes, the US loves tyrants who serves them, the Israeli lobby, and themselves. According to the UN, more than 3,000 persons have been killed from KSA bombings in Yemen, and the MAJORITY (unlike in Syria) have been CIVILIANS. Imagine if Iran did that to a neighbor, the US will call him a Hitler. You can be for Al Qaida or a mass murderer, just as long you call the NATIVES and you stay away from Israeli (US) domination, you are considered a noble person (and they wonder "why they hate us").

corr. Just as long you kill (not call) the natives...

Indeed bigjohn.
I wish all Americans thought as you.

The reason they found only 60 is exactly because one condition set on them by the Obama adminnistration is that they WILL NOT fight Assad. Well these are the original anti-assad Syrians who preceeded ISIS. These are the ones who were hoping to replace a dictatorship with something more modern and Democratic ....... so they are in it to fight both ISIS and Assad, but the American Administration wants them to fight only ISIS (but not Assad). This is why they were able to train only 60. Now you know that the American Government is still wanting Assad to stay in power but somewhat in a declawed form.

"Citing statements from Saud's counterparts in the United Arab Emirates and Kuwait, as well as Sheikh Ahmed al-Tayyeb, the head of Egypt's Al-Azhar, the agency said officials paid tribute to a "man of peace, (a) balanced and moderate thinker."...Yes, he was a man of "peace" dealing with what they called Israeli genocide, but financing war throughout the Arab world to kill the masses and creating a humanitarian catastrophe on the people of Yemen. Sooner or later, no amount of money will prevent the wrath of the populace.

America (Israel) supports any group that kills and enslaves the masses. It is the old divide and conquer colonial mentality just as long they do not challenge their hegemony.

beacon of freedom texas? Say that to the millions of Vietnamnese you slaughtered with your fake american values, when you dropped Napalm on women and children overthere.
While saying to yourselves, "it's just a few gooks". Or in Iraq, even though I am anti Saddam, I was against the American intervention, when you were saying back then "It was just a few sand niggers". Killing alot of iraqis aswell, or Libya that is now a ISIS safe haven because of your democracy.

America is the beacon of tyranny and terrorism in this world.

You saudi princes have betrayed the Muslim community. You are servants of the world's biggest criminals because you are afraid of them. You're not Muslim.