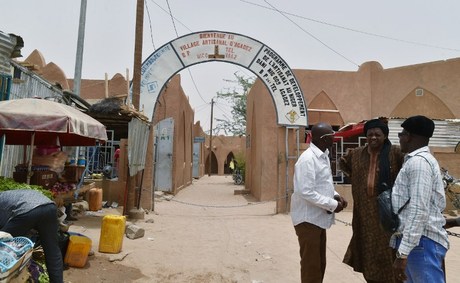 Boko Haram militants slit the throats of five civilians in southeast Niger during a targeted attack by the Islamist group wreaking havoc in the region, according to local authorities.

"Five employees of a Nigerien company had their throats slit yesterday (Thursday) evening in Dagaya, a village near Bosso," Mayor of Bosso Bako Mamadou told AFP.

The victims were a driver, a carpenter and three construction workers who were working at a site in Dagaya, according to local radio.

"We do not know the circumstances of the attack," Mamadou said, adding that security measures had been put in place.

Local officials say they believe that the militants targeted the five workers, who were from the city of Diffa, which is located in the heartland of the Boko Haram insurgency.

Many young people from Diffa, which borders Nigeria, have joined the ranks of Boko Haram, getting paid about 300,000 CFA francs (around 450 euros or $500) per month, according to local officials.  In June 38 civilians were killed -- including 14 women and 10 children -- in a Boko Haram attack targeting two villages in southeast Niger, close to Diffa.

Troops from Niger, Chad, Nigeria and Cameroon have been fighting Boko Haram insurgents for several months and have claimed a string of successes.

But a recent surge in an attacks has left analysts suggesting a decline in the intensity of operations has allowed the rebels to regroup and rearm.

The six-year insurgency, centered around northeast Nigeria, has claimed at least 15,000 lives.