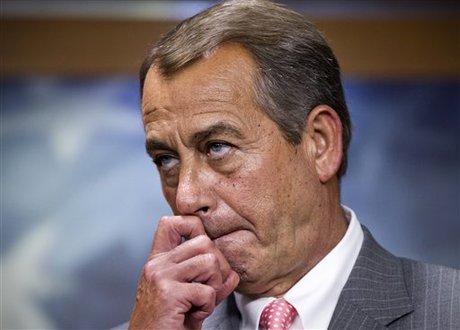 "Instead of stopping the spread of nuclear weapons in the Middle East, this deal is likely to fuel a nuclear arms race around the world," the Republican Boehner said in a statement, adding that U.S. lawmakers will "review every detail of this agreement very closely."

Boehner was joined by others in Congress expressing deep skepticism about the agreement, arguing that it gives too much leeway to Iran and does not definitively shut the door on the Islamic Republic developing the bomb.

McConnell said Congress, which has 60 days to review the accord, will hold hearings on the deal, in particular to study the "concessions" that Iran was able to secure from the Obama administration.

And he expressed "grave concern" about Iran's support of terrorism and its determination to expand its ballistic missile capabilities.

"The Senate must now weigh why a nuclear agreement should result in reduced pressure on the world's leading state sponsor of terror," he said.

Obama had barely concluded remarks from the White House praising the agreement when Republican opponents weighed in, warning it will be a tough sell in Congress, where members could scupper the achievement.

While lawmakers in Washington do not have to ratify the deal for it to take effect, they do have the power to block it.

"The American people are going to repudiate this deal, and I believe Congress will kill the deal," freshman Senator Tom Cotton, who penned an explosive, hard-line letter in March to Iran's leaders, said on MSNBC.

The top Democrat on the Senate Foreign Relations Committee, Ben Cardin, said Congress must "vigorously and judiciously review" the deal in the coming weeks.

"There is no trust when it comes to Iran," Cardin said. "In our deliberations we need to ensure the negotiations resulted in a comprehensive, long-lasting, and verifiable outcome that also provides for snap-back of sanctions should Iran deviate from its commitments."