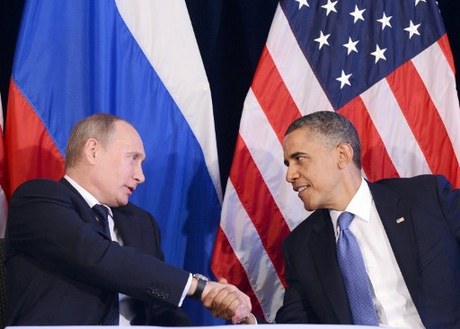 President Barack Obama spoke by phone Wednesday with Vladimir Putin, thanking his Russian counterpart for his role in reaching a deal on Iran's nuclear program.

U.S. ties with Russia have been strained to breaking point over the war in Ukraine, but Russia was an "important" part of the group of nations that negotiated the deal with Tehran.

"The president thanked President Putin for Russia's important role in achieving this milestone, the culmination of nearly 20 months of intense negotiations," the White House said in a statement.

"The leaders committed to remain in close coordination" it continued, "and also expressed a desire to work together on reducing regional tensions, particularly in Syria."

There was no mention of the ongoing violence in Ukraine.

Russia has been locked in its deepest standoff with the West since the end of the Cold War over Moscow's seizure of Crimea from Ukraine and alleged fueling of a separatist conflict.

Ukraine lost eight soldiers Wednesday in a dramatic spike in fighting with pro-Russian gunmen that further imperiled a truce Washington's top European envoy is desperately trying to salvage in Kiev.

Obama has twice in two days offered praise for Russia's role in reaching a deal with Iran.

"Russia was a help on this," he told the New York Times.

"I'll be honest with you. I was not sure given the strong differences we are having with Russia right now around Ukraine, whether this would sustain itself," he said.