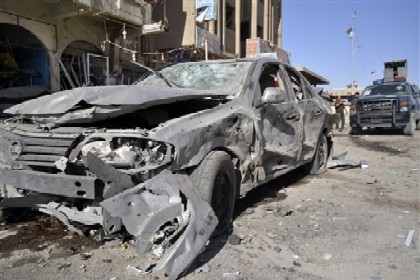 Bomb and gun attacks in Iraq have killed nine people, including a mayor, four soldiers and two family members of a Shiite cleric, and wounded 22 others, security officials said on Wednesday.

In Iskandiriyah, 50 kilometers south of Baghdad, "unknown armed men attacked the house of Safaa al-Mussawi, a Friday prayer leader, with bombs" during the night, a police first lieutenant said.

The Shiite cleric "and his son were seriously injured and his wife and daughter were killed," the officer said.

A source in the office of Grand Ayatollah Ali al-Sistani, Iraq's top Shiite cleric, confirmed the attack on Mussawi's home.

The mayor of Iskandiriyah was killed on Tuesday night, a police source said.

"Armed men killed the mayor of the Iskandiriyah sub-district yesterday night. His name was Ali al-Massudi, from the Sadr movement," the source said, referring to the movement of anti-U.S. Shiite cleric Moqtada al-Sadr.

And one Iraqi soldier was killed and another wounded in an attack by gunmen on a patrol in the Iskandiriyah area, an army captain said.