Heineken Profits Up Despite Bad Beer Season for Europe 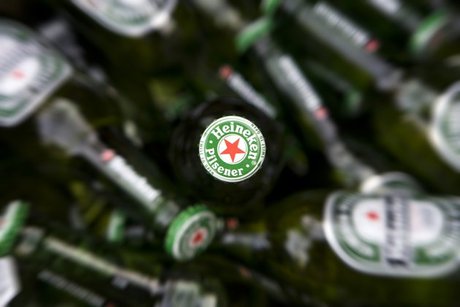 Dutch brewer Heineken published a one percent climb in net profit for the third quarter Wednesday, saying strong sales in Africa and elsewhere offset the impact of poor summer weather in Europe.

Net profit reached 525 million Euros (U$731 million) in the July-September period, while sales grew slightly by 0.6 percent from last year to 4.65 billion Euros, despite the disadvantage of a strong euro, the company said.

Analysts surveyed by Dow Jones Newswires had expected sales of around 4.55 million Euros.

Heineken sold 56.9 million hectoliters of beer in the third quarter, an increase of 2.7 percent, with western Europe the only region to record a fall in volume.

"This primarily reflects the impact of unusually poor weather in July and early August across large parts of the region and ongoing economic uncertainty," resulting in a 1.7 percent drop in volumes in western Europe, Heineken said in a statement.

"However, beer volumes showed solid improvement in the latter part of the quarter as weather conditions became favorable," it added.

Elsewhere, beer volumes grew by 4.9 percent in eastern Europe, driven by a "strong volume rebound in Russia", while in Africa and the Middle East, total volume grew by 10 percent, boosted by good results in Nigeria, Rwanda and the Democratic Republic of Congo.

In Greece, the demand for beer was hampered by the government's austerity measures, leading to a single-digit decline, it said.

The Dutch group stressed its outlook was on target for 2011 with operating profit "broadly in line with last year" at 1.445 billion Euros.

Heineken planned by the end of 2013 to have implemented savings of 150 million Euros through synergies in distribution and administration after buying Mexican beer maker FEMSA.

The deal was announced in January 2010 for 5.3 billion Euros.

Heineken was founded in the nineteenth century in Amsterdam and produces and sells over 200 brands of beer and cider. The group employs over 70,000 people worldwide.