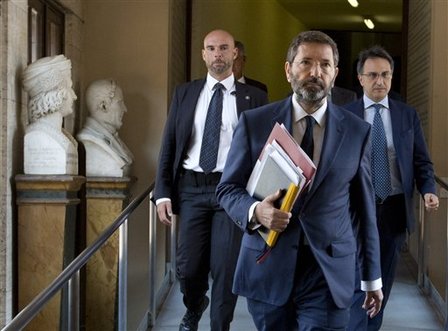 It boasts some of the most prized archaeological sites in the world, but modern-day Rome, plagued by the mafia, has descended into a grimy and disheveled chaos where its beleaguered mayor is fighting for his political life.

Ignazio Marino on Tuesday appointed a new transport councilor in a bid to combat corruption in a sector which has failed pitifully in the searing summer heat, with tourists and locals alike hit by long delays and overcrowded public services.

But transport is only one of his worries: piles of rubbish have begun accumulating in the city's most picturesque areas, its parks are overgrown, graffiti is on the up, council houses are scarce and Roman ruins lie abandoned.

"I didn't imagine when I became mayor that I would find empty coffers, organized crime, corruption," the mayor told a press conference, while insisting that his team was up to meeting the "exceptional challenge."

Marino, a member of the left-leaning Democratic Party (PD), has promised the heavily-indebted city will be cleaned up in time for a Jubilee year which kicks off in December, but has come under increasing pressure from the top to step up his act or resign.

In a letter published by Il Messaggero daily Tuesday, Prime Minister Matteo Renzi said the eternal city "does not deserve this."

He said the government and PD "are here to help," but that needed Marino to "present credible and concrete projects" to "relaunch Rome, a showcase and business card for the country."

Protesters from the New Center-Right (NCD) party erected a white flag in front of the town hall with the message "Marino surrender!"

The embattled mayor has been gasping for breath since revelations at the end of last year of a mafia network operating out of Rome's city hall, pocketing millions of euros from a string of lucrative contracts thanks to corrupt contacts on the inside.

Former center-right mayor Gianni Alemanno, city councilors and business figures are being probed in the so-called "Mafia Capitale" investigation which is looking into fraudulent nods for tenders in everything from garbage recycling to refugee housing.

Police believe the network was run by Massimo Carminati, a notorious one-eyed underworld figure with links to the far right.

A former member of the infamous Magliana crime gang, which wielded enormous influence in Rome in the 1970s and 1980s, Carminati lost an eye in a shoot-out with police and has been dubbed the "black soul" of the Roman underworld.

While wiretaps leaked to the media showed Marino had refused to play ball with Carminati's gang, he has been attacked by critics and the national press for being too inexperienced to tackle such an entrenched system of corruption.

Matteo Orfini, appointed by the PD as a commissioner in Rome after the scandal broke, defended the left's record in power.

Marino may have made mistakes in his two years in power, "but we inherited an insane hole in the budget which prevented any investment," he said, adding: "we are still paying for the damage inflicted by Alemanno."