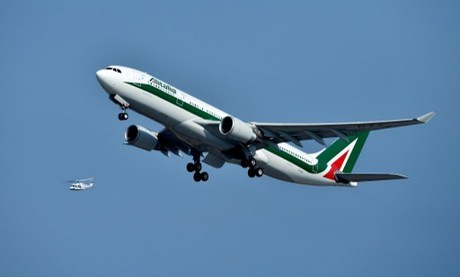 Flights in and out of Rome's disaster-hit Fiumicino airport were seriously disrupted for a second day Thursday after a fire in a nearby pine grove threw dense smoke across the runway.

The blaze on Wednesday forced the suspension of all flights for two hours, with long delays stretching into the night even after the fire was brought under control.

On Thursday most flights out of the Italian capital's busiest hub were at least an hour late, with a 20-minute power cut in the terminal adding further to the chaos and infuriating delayed passengers.

The airport was last forced to close in May after a blaze devastated part of a terminal which has yet to fully reopen.

Interior Minister Angelino Alfano confirmed that an investigation had been opened after authorities found that Wednesday's fire started in multiple places, leading them to believe it was started deliberately.

Fiumicino mayor Esterino Montino said the blaze had spread on a front about one kilometer (half a mile) wide.

"The fire seems to have started in two or three different places," he added.

May's blaze was triggered by an electrical fault in a bar which sparked scenes of total chaos, with thousands of people hit by flight cancellations and airport staff forced to wear protective masks.

Terminal three, which handles international flights, was seriously damaged and the airport was forced to reduce capacity by 40 percent.

Italy's civil aviation authority ENAC has called an August 6 meeting with airport chiefs and Alitalia, which runs half of all flights from Fiumicino, to "verify their capacity to react" to crises after Wednesday's chaos.

Alitalia said Wednesday that the cost of damages from the May 7 fire had reached 80 million euros ($88 million), but the figure could still rise.

The airline's CEO Silvano Cassano said in a statement that it had been an "extremely difficult period" and warned the company could be "forced to shift its growth elsewhere."

The airport's woes have piled on the problems for Rome's mayor Ignazio Marino, who has been battling accusations that the Eternal City has descended into grimy and disheveled chaos, where the transport sector in particular has failed pitifully in the searing summer heat.

The embattled mayor was confronted with revelations at the end of last year of a mafia network operating out of Rome's city hall, pocketing millions of euros from a string of lucrative contracts thanks to corrupt contacts on the inside.

Marino promised Tuesday that the heavily-indebted city would be cleaned up in time for a Jubilee year which kicks off in December, appointing a new transport councilor and assuring skeptics that Fiumicino was finally back on track.