The Kennedy Speech that Obama Hopes to Echo 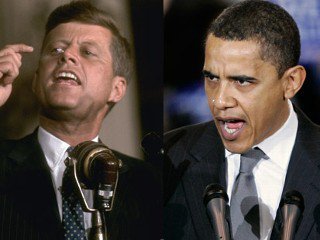 In 1963 U.S. President John F. Kennedy traveled the short distance from the White House to American University to muster support for diplomatic engagement with nuclear foe the Soviet Union.

On Wednesday, at the same spot, President Barack Obama will echo Kennedy's entreaty, arguing for a nuclear deal with Iran -- a country described by his predecessor as part of an "axis of evil."

Kennedy began his speech by addressing the prevailing notion that military might was the most effective way of dampening the Soviet nuclear threat.

Urging Americans to examine their own attitudes, he insisted peace was a better, if more arduous, path than "total war."

The speech came the year after the Cuban missile crisis and with Nikita Khrushchev's Soviet Union maligned and feared in a way that Iran has been since the 1979 Islamic Revolution.

Still, Kennedy called on Americans not to over demonize what some called the "main enemy."

"No government or social system is so evil that its people must be considered as lacking in virtue," Kennedy said.

"As Americans, we find communism profoundly repugnant as a negation of personal freedom and dignity. But we can still hail the Russian people for their many achievements -- in science and space, in economic and industrial growth, in culture and in acts of courage."

The vehicle for achieving peace, Kennedy said, was a "gradual evolution in human institutions."

"There is no single, simple key to this peace -- no grand or magic formula to be adopted by one or two powers."

Kennedy said the starting point was two very concrete steps: A direct hot line between Moscow and Washington and talks toward a comprehensive test ban treaty.

Extending the olive branch, he unilaterally offered a US moratorium on nuclear tests in the atmosphere.

Although a treaty would never fully come into force -- a partial treaty reciprocating Kennedy's offer to forego atmospheric tests would -- these efforts would ultimately do much to keep the Cold War from turning hot.

At the same time Kennedy also promised not to hurt existing alliances in the pursuit of peace.

"The United States will make no deal with the Soviet Union at the expense of other nations and other peoples," Kennedy said.

That, like much of the rest of the speech, may resonate well with Obama as he faces bitter Israeli opposition to his Iran deal.

After courting allies, lawmakers and experts to his cause, Obama will hope Kennedy's appeal for peace, engagement and diplomacy can also be enlisted to the cause.