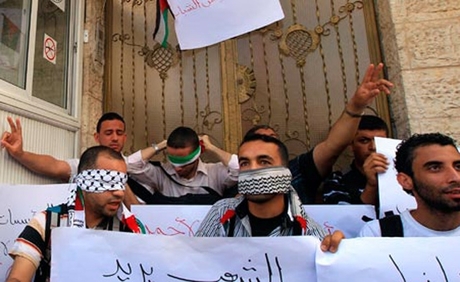 Israeli authorities have declared their intention to force feed a hunger-striking Palestinian, his lawyer said Saturday.

If carried out it would be the first case since the adoption last month of a new law permitting the practice.

The International Committee of the Red Cross warned Friday that alleged Islamic Jihad activist Mohammed Allaan, held without charge since November, was "at immediate risk" of death after fasting for 50 days.

"I have informed him of this but it does not alter his intention to continue his strike," Khatib said, adding that his client had actually been refusing food for 55 days by Saturday.

He added that Allaan was placed in intensive hospital care when his body became unable to absorb drinking water.

Allaan, himself a lawyer, is being held under a procedure allowing indefinite internment without charge.

Palestinians in Israeli prisons regularly go on hunger strike in protest at conditions, particularly those who, like him, are held in what Israel calls administrative detention.

While the new law does not specifically mention Palestinians, Internal Security Minister Gilad Erdan, who sponsored the legislation, said last week it was necessary since "hunger strikes of terrorists in prisons have become a means to threaten Israel."

The US force feeds hunger striking prisoners as well. The UNHRC did not object to the procedure.