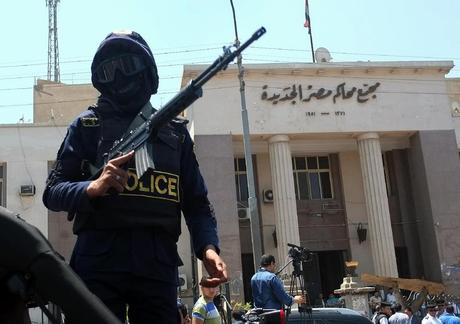 A small bomb exploded Monday near a traffic post in the Egyptian capital wounding four policemen, two of them seriously, in an attack claimed by a Cairo-based militant group.

Jihadists have launched a wave of attacks targeting security forces since the ouster of Islamist president Mohamed Morsi in 2013.

Most attacks have been in the Sinai Peninsula, but deadly bombings have also been staged in Cairo and some other Egyptian cities.

Monday's blast targeted a traffic post near a court house in the busy Heliopolis district.

The interior ministry said the wounded included a police colonel and a major, but did not specify if they were the ones seriously wounded.

Cairo-based militant group Ajnad Misr (Soldiers of Egypt) claimed the attack in a statement posted on an affiliated Twitter account.

Ajnad Misr has previously claimed several deadly attacks in Cairo, particularly targeting police, and have planted bombs outside key buildings such as a presidential palace and Cairo University.

In April, the group's leader Hammam Mohamed Attiyah was shot dead in a gunfight in Cairo when security forces raided an apartment.

Police say Attiya previously belonged to Ansar Beit al-Maqdis, the Egyptian branch of the jihadist Islamic State group, but broke away in 2013 to found Ajnad Misr, a group operating mainly in Cairo.

Ansar Beit al-Maqdis is now known as "The Sinai Province" after it pledged allegiance to the IS in November. The group is spearheading an Islamist insurgency in the Sinai Peninsula.

Jihadists say their attacks are in retaliation for a government crackdown targeting Morsi supporters that has left hundreds dead and thousands jailed.

Days later a car bomb tore through the Italian consulate in downtown Cairo in an attack claimed by IS.

It was the first such attack targeting a foreign mission in Egypt since Morsi's ouster.