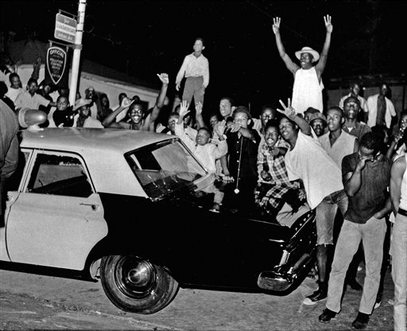 On August 11, 1965, Marquette Frye, an African-American man, was stopped for drunk driving by a white officer in Los Angeles, touching off six days of riots that left 34 dead and changed America.

Fifty years later, many things have changed but the friction between police and the public remains.

Demonstrations in Ferguson this week to mark one year since the death of 18-year-old Michael Brown are a reminder that many still accuse police of unfairly targeting blacks and using excessive force.

Brown was the first in a string of deaths of African Americans in the hands of police, which sparked waves of sometimes violent protests, reminiscent of those that followed 21-year-old Frye's arrest in Watts.

For Masai Minters, Frye's arrest was a call to action.

"I was watching television. I heard the police brutalized Marquette Frye," said the psychologist and counselor at the University of California Los Angeles.

"When it began to swell, I got in a car with my friends and got there," added Minters, who was 15 at the time.

Rumors swirled that the Los Angeles Police had killed someone and hundreds of people swarmed into the streets.

Earl Ofari Hutchinson was six at the time and remembers being two blocks away from the riots on that first day.

"LAPD was coming down in their battle gear. They were screaming 'get out of the streets.' People were shouting back. I remember the liquor store, it went in flames. It was like a scene from 'Dante's Inferno,'" said Hutchinson, an author and political commentator.

"It was just chaos. It was transforming."

After years of frustration over discrimination and police brutality in predominantly black Los Angeles neighborhoods like Watts, residents were setting their anger loose.

More than 1,000 people were injured in the riots, which caused more than $40 million worth of damage.

Hutchinson described scenes of war between what he said was a mostly white police force and black residents.

"It was them against us. They were wearing battle gear, they had tanks, they had state power, but I will never forget the look of fear in their eyes," Hutchinson said.

Minters remembers the rage and fear, the thrilling chaos of six days pulsing with the rally cry "burn baby burn."

But the main thing he remembers is the feeling of freedom, the pride in daring to confront the police after years of being harassed and hassled by them.

"It was the first time in my life I had seen this type of pushback. I was proud. It changed my life, and I'm still pushing back," he says.

Hutchinson said you could feel change happening during the Watts riots.

The desegregation of the South was still fresh in people's memories and the Voting Rights Act, which lifted barriers preventing many African Americans from voting, had just been signed days earlier.

But the Black Power movement, the Black Panthers, Tommie Smith and John Carlos raising their fists on the Olympic podium -- those were all still to come.

"It's a spark that aroused a political consciousness," says Scott Brown, a history professor at UCLA.

But many underlying causes for the unrest have largely remained unaddressed.

In some ways those underlying problems are far more troubling than the violence itself.

For Watts resident Shanice Joseph, 23, the main problem in the community is not violence.

"It's the lack of jobs and the poor public services that residents worry about," she said.

"The deeper structural economic inequality, the police violence -- these are hallmarks of the urban experience and we see these replicating. But Watts was pivotal," Brown said.

In 1992, those hallmarks reignited Los Angeles tempers after the police officers who had beat up a young black man, Rodney King, were acquitted. Fifty-five people died in those riots.

Now, the police force is more ethnically diverse, there is more interaction with residents, and there are greater safeguards against corruption, Hutchinson said.

But the frustrations that gave rise to past riots continue to simmer over.

"There's always something boiling. There's always a kind of structural violence that happens daily in dealing with economic inequality and police violence and poverty that you cannot measure," said Brown.