Abou Faour: Lebanon on Verge of Disaster because of Waste Crisis 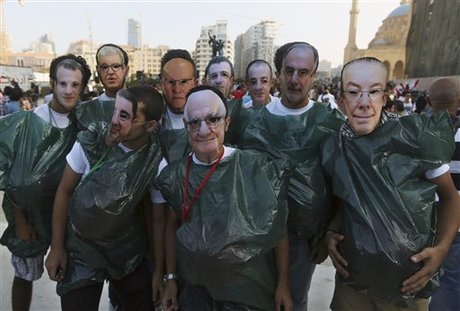 Health Minister Wael Abou Faour warned on Monday that Lebanon's air, food, and water are at risk from the ongoing waste disposal crisis, urging the state to take “immediate measures” to resolve the problem.

He said during a press conference: “Lebanon is on the verge of a health disaster because of the crisis.”

The citizens are not responsible for ending the crisis, but the government is, he declared.

“The state should take the necessary measures and officials should set aside their political calculations,” demanded Abou Faour.

“The cycle of disputes and bickering among politicians has to come to an end as we do not have the luxury of time,” he stressed.

Moreover, he remarked that the option of exporting the waste is not possible, which should prompt the cabinet to take matters into its own hands.

“All options have reached a dead-end,” he noted, while hailing the efforts of Prime Minister Tammam Salam and Environment Minister Mohammed al-Mashnouq.

“I will carry out arrangements with municipalities to manage the crisis,” he revealed.

Regarding the garbage in Beirut, he demanded that it be removed near schools, daycare centers, hospitals, and the port, where it is being dumped by a nearby flour mill.

“My proposals will be relayed to the prime minister and crisis cells will be set up to manage the problem. If we are not able to act as a complete state, we should at least work as a partial one. We should not keep the citizens' health at risk,” he stressed.

He later headed to the Grand Serail for talks with Salam.

Lebanon has been suffering from a waste disposal crisis since the closure of the Naameh landfill on July 17, with Beirut and the Mount Lebanon areas most affected.

The cabinet's failure to find an alternative landfill and various municipalities' rejection of having waste from the capital and Mount Lebanon dumped in their areas have exacerbated the crisis and led to the establishment of arbitrary landfills.

Abou Faour had previously held press conferences warning of the health dangers of the accumulating waste, which has overflowed in dumpsters.

No one is listening as the ministers do not live near the waste heaps. That is where the people live. Bu faour is right that its the governments role to resolve the dispute but they seem to be preoccupied with other issues as the head of the Army tfeh 3alayhom.

Let them dump the garbage in Rabyeh. Aoun himself said the government shouldn't be "sha77adeen msharteen" when it comes to the place that the garbage is supposed to be dumped...

I'm with you, in that the government should resign in block. It's a stillborn anyway. They haven,t made a single decision since last June. However, there are ramifications to that resignation.

With no president, no one can appoint a new government, and then who will TRY to fix the waste problem?

Things can only get better if Aoun's and Hizbullah blocks decide to vote for a president in 3 weeks.

@shiakiller No, no new government may be appointed without a president. Basically, Lebanon will be rudderless. If you thought waste management was a problem, you can imagine what would happen without a government.

What was bassil doing for the last 5 years????? Stop blaming right and left! where is the 24/24 electricity he promised us. Aoun and the FPM should resign immediately and put on trial.

sad state of affairs when the people who pretend to be in charge just take money and give nothing in return to the nation and its people...the garbage crisis is a perfect example. Those responsible should be held accountable...but there is no such thing in Lebanon.