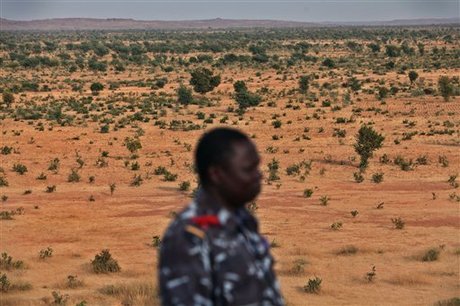 U.N. peacekeepers set up a security zone around the northern Mali town of Kidal on Tuesday to curb fighting between rival armed groups that threatened to torpedo a fragile peace deal.

Three days of clashes between pro-government militants and Tuareg rebels in the troubled region left several dead and led neighboring Niger to call off a round of reconciliation talks planned Wednesday.

The outbreak of violence was slammed by the U.N. as a "blatant violation" of the peace deal which seeks to end decades of ethnic divisions and uprisings by Mali's Tuareg, a traditionally nomadic people whose 2012 rebellion plunged the country into chaos.

The peacekeeping mission in Mali, known as MINUSMA, has set up a 20-kilometer safety zone around the rebel stronghold of Kidal, 1,500 kilometers (750 miles) northeast of the capital Bamako, to protect civilians and prevent a spread of fighting.

The establishment of the safety zone comes after three days of clashes between pro-government Tuareg fighters -- who form part of the loyalist Platform coalition -- and the rebel Coordination of Azawad Movements (CMA).

The two groups accused each other of starting the fighting over the weekend.

The worst clashes took place on Monday as loyalist fighters seized control of Agnefis, about 120 kilometers south of Kidal, which is the stronghold of the CMA.

A MINUSMA security source told AFP the clashes had left at least 10 people dead and many injured.

Fahad Ag Almahmoud, a top official from the pro-government alliance, spoke of 15 deaths.

A meeting planned in Niamey to "seal the peace" between the rival groups who concluded a peace deal in June, was called off "due to the fighting," said a source involved in the organization of the meeting.

The outbreak of violence also sparked concerns among ordinary Malians of a return to the chaos experienced after a 2012 Tuareg uprising in 2012 which sparked a coup in Bamako.

The political upheaval allowed the separatists to seize large parts of the north in alliance with al-Qaida-linked militants who later cast out the Tuareg and seized full control of the vast desert north for nearly 10 months.

The Islamists were ousted in a French-led military offensive in 2013 but Bamako has yet to gain full control of the north which is overrun with competing armed groups.

The peace deal is seen as key to stability in the remote north whose Tuareg and Arab populations have long accused sub-Saharan ethnic groups in the more prosperous south of marginalizing them.

"Sure, there have been acts of violence here and there, terrorist acts ... but this is the first time that signatories of the accord, through deliberate action, have violated the accord," said government spokesman Choguel Kokalla Maiga in comments to the Essor daily.

"We are very worried about the future, especially because it seems both sides are using heavy weaponry," a foreign security source in the region told AFP.

The source said that during Mali's rainy season, many of the roads become impassable in the north and groups end up fighting each other for control of roads used for trafficking.

"There has been no fighting on Tuesday but near the town of Touzik (where fighting began Saturday) tension is palpable," said a MINUSMA source.

MINUSMA said in a statement Monday the security zone would "remain until further notice."

Any movement within the zone by pro-government Tuareg forces or their allies "will be deemed to constitute an imminent danger to the security of the population of the town of Kidal," it said.

The peacekeeping force would "act in accordance with its mandate" in the event of any violation, it added.

MINUSMA also said it would carry out investigations to determine responsibility for the ceasefire violation and forward the findings to the U.N. Security Council.