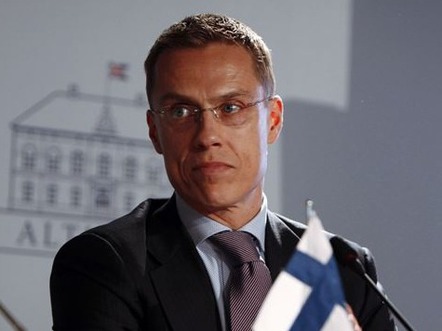 Vandals smashed windows at Finnish Finance Minister Alexander Stubb's private residence in the early hours of Tuesday as he and his family slept, the government said.

"The police are investigating the incident, which involved intruders entering Stubb's premises and breaking windows," the head of government security Jari Ylitalo said in a statement.

"His windows were broken from the outside," Ylitalo said.

Stubb, who served as prime minister from June 2014 until May 2015, told reporters a loud noise woke him and his family in the middle of the night in their home in a posh neighbourhood of Espoo, a suburb outside Helsinki.

"My family is fine ... On no account will we allow fear to take over," Stubb said at his National Coalition Party's summer gathering in the town of Rovaniemi in northern Finland.

He also said his family had not been in danger at any time.

Ylitalo told the media it was not yet known if the intruders were aware of whose premises they had targeted. He said the government's security practices would be reviewed.

The police described the incident in a statement as "disturbance of domestic peace" and "vandalism."

The incident came as a shock to many in the Nordic country where political violence is rarely seen.

Prime Minister Juha Sipila quickly condemned the incident on Twitter, saying "there is no room for this sort of action in our democracy."

In Finland it is common for top politicians to live in residential areas with moderate security arrangements.