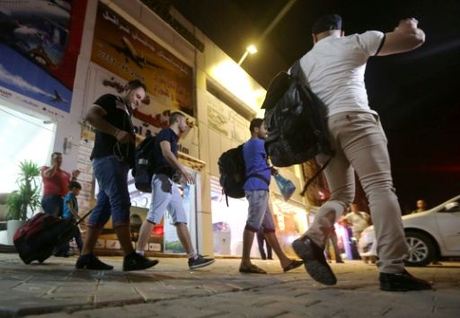 Iraq's gateway to Europe, the northern city of Arbil, is the first bottleneck on a long and uncertain journey for a growing number of Iraqis choosing exile.

"We're selling a lot of one-way tickets these days. More than ever. People are desperate," said Emre Shawkat, who runs a tourism transport business in Arbil, capital of Iraq's autonomous Kurdish region.

In 2014, tens of thousands of Iraqis fled when the Islamic State jihadist group launched an onslaught that overran large areas and brought the country to the brink of breakup.

The militants have carried out atrocities from beheadings and mass executions to enslavement and rape in the territory they control in Iraq and in neighbouring Syria.

Unemployment, poor services and corruption are other factors in making Iraq one of the main departure points of migrants scrambling towards Europe.

Iraqi citizens made up the fifth-largest group of people seeking asylum in the European Union in the first quarter of 2015, and their numbers tripled compared with the same period a year before, according to EU data.

"Nothing good is going to come out of this country," said Ihab al-Ajili, a 25-year-old from Baghdad, waiting for his bus outside Shawkat's office.

"I'll do anything. Any job in Europe will be better than staying here," he said.

Germany usually tops the list of preferred destinations, followed by Sweden and other Scandinavian countries, where they believe benefits for asylum seekers are the most generous.

They have seen footage of asylum seekers being rescued in the Mediterranean, but appear to have limited awareness of the difficulties that await.

"We are now going to Turkey, to Izmir. There are smugglers there. They put us on boats and dinghies to Greece," said Ajili's friend Hussein al-Shammari.

He then recited their journey to Austria, where they plan to split up: Athens to Macedonia by train, then through Serbia and Hungary to Austria with the help of smugglers.

As another batch of young emigrants boarded a bus on the same stretch of road, Abdul Jalil Ahmed -- a travel agent from Baghdad who opened his business in Arbil three years ago -- held back tears as he saw his one-time customers off.

"One was a law graduate. They are educated people and they won't come back," said the 52-year-old.

With no detailed plan, young Iraqis leave home hoping that $5,000 in smuggler fees will get them to western Europe.

Others are prepared to pay more to obtain a visa and fly.

Their aim is to secure visas without their own fingerprints on them because under EU asylum regulations that can help them avoid deportation.

It will cost Deria Saddiq $12,000 apiece for him and his wife, and $7,000 for each of their three sons to get visas with fake fingerprints from the companies contracted to handle applications by many of the consulates in Arbil.

With a monthly income of $3,000, a spacious and handsomely furnished new house on the outskirts of Arbil, the 32-year-old Kurd hardly seems a likely candidate for emigration.

"Now I'm ready to give it all away at once to be in one of those countries," he said. "Any place as long as I am happy, secure, have social justice and human rights."

As he sat in his living room sofa, the main Kurdish news channel was broadcasting footage of Syrian Kurds arriving on the Greek island of Kos after crossing the Mediterranean on rubber dinghies.

"I want my children to live a good and safe life far from what is going on here," Saddiq said.

Once depicted as an increasingly prosperous beacon of stability with a brighter future than the rest of Iraq, Kurdistan is also bleeding emigrants.

Kurdistan "will never be paradise. It's going to get worse every year... because Kurds are not united," he said. "They are ready to start another civil war."

Back at his small office, tourism business owner Shawkat was equally bitter.

"We can't even have electricity here. So you can sit in your sweat and wait for change or you can leave the country," the young Kurd said.

"I understand the people who are leaving. Look at my employee here," he said, pointing to the counter with a flick of the head.

"He works for $300 a month. That's the extent of the opportunities he has now. I might put him on a bus myself one day. Actually, if I wasn't married with kids, I would leave too."