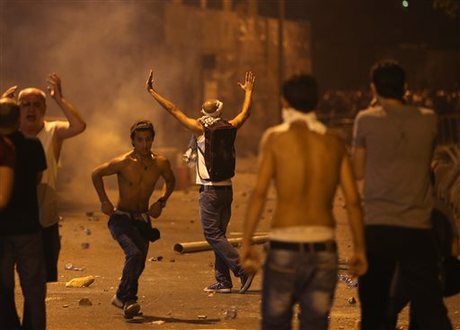 The online group calling itself "You Stink” on Monday called for a Saturday demonstration to demand the annulment of the waste management tender whose results were announced earlier in the day by the environment minister.

The movement “salutes all Lebanese who flocked to the Riad al-Solh Square over the past days to respond to the authorities' aggression,” it said in a statement recited by the activist Marwan Maalouf during a press conference.

“Their unity taught a major lesson to the government, which escalated its violence in a bid to distort the image of the popular movement, and rushed to finalize the suspicious deal and declare the names of the firms that won the tenders,” the group added.

It warned that the government is “trying to give the impression that the problem is a sectarian conflict.”

“The tenders that occurred are aimed at stealing public funds and all the ministers, firms and municipalities that took part in them are partners in this theft operation,” You Stink added.

The campaign also called for the prosecution of the officials and security personnel who used excessive force against demonstrations on Saturday and Sunday, urging the release of all detained protesters.

Stressing that the controversial Naameh landfill must not be reopened, You Stink said Environment Minister Mohammed al-Mashnouq must be held accountable over his “failure” in handling the garbage crisis.

The campaign concluded its statement by calling on citizens to demonstrate on Saturday at 6:00 pm at a location that will be announced later.

Earlier in the day, You Stink announced the postponement of a demonstration that had been scheduled for Monday afternoon. However, citizens and activists continued to flock to the Riad al-Solh Square and a sit-in was swelling in numbers with the early evening hours.

On Sunday, You Stink and other protest organizers pulled their supporters out of Riad al-Solh Square and moved to the Martyrs' Square after men they described as political thugs began fighting with police.

The “thugs” tried to tear down a barbed wire fence separating the crowds from the Grand Serail and threw rocks and molotov cocktails at security forces.

One of the protesters, who was seriously injured in the head, was on Monday in critical condition despite undergoing a surgical operation.

The You Stink campaign, which began receiving the backing of Lebanese from across Lebanon, first launched its campaign against the government after the closure of the Naameh landfill caused trash to pile up on the streets.

The announcement of the winning waste management tenders is not expected to resolve the garbage crisis anytime soon. The winning firms need at least six months to start operating.

According to As Safir daily published Monday, Speaker Nabih Berri has urged Prime Minister Tammam Salam to mull ways to reopen the Naameh landfill in coordination with Progressive Socialist Party chief MP Walid Jumblat pending a solution to the crisis.

But it was not clear if residents living nearby, who say daily life is unbearable and allege gases produced by the site cause health problems, would accept such a decision.

Beautiful, from all my heart, I hope that these guys rust in Jail. TAMMAM SALAM you waited and waited and hopped for solution with people "hamag" "low lifes like that (half kilo Gel ) that speaks better than Qawook to those thugs of course have nothing to do with solution. IF INDEED you care, put all your energy in cleaning the streets of your villages find a way to teach people how to recycle, tell ClAoun nit to obstruct the government, then tell Hizbolah not to take overthe streets with thugs, then will have the right to atack Salam.

All the photos show that the Moundassoun are from Ebola and Amal.

Dima Sadek (journalist) has also revealed it on Facebook...