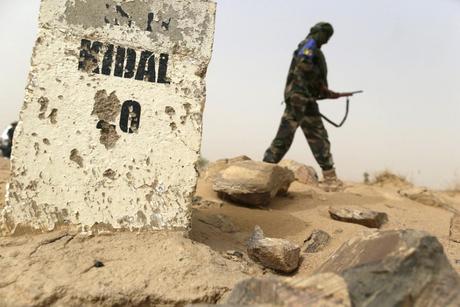 Tuareg rebels in northern Mali said Sunday they were pulling out of an international committee set up to monitor a peace accord between them and pro-government forces in the restive region, after deadly clashes between the rival groups sent tensions soaring.

Sidi Brahim Ould Sidati, a representative of the rebel Coordination of Azawad Movements (CMA) said his grouping was "suspending our participation in the monitoring group" until loyalist forces pull out of the town of Anefis, about 120 kilometres (75 miles) south of the CMA stronghold Kidal.

Pro-government militants seized the town on Monday after three days of bitter fighting which left at least 10 people dead, according to a source with MINUSMA, the U.N. mission in the country.

Both sides accused each other of starting the fighting, described by the government as the first deliberate violation of the recently-agreed peace deal seen as key to returning stability to the vast northern region.

After the outbreak of violence U.N. peacekeepers set up a "security zone" around the northern town of Kidal, some 1,500 km northeast of the capital Bamako, in a bid to curb tensions.

The monitoring committee, chaired by Algeria, was put in place to oversee the implementation of the deal signed in May by loyalist groups and in June by the reluctant CMA, an umbrella group for the separatist Tuareg.

Ould Sidati said however that the CMA "would remain part of dialogue as long as there are no more ceasefire violations on the ground".

A U.N. security source confirmed to Agence France Presse that the CMA, which represents several rebel groups, had announced to international mediators it was boycotting the monitoring group.

The rebels have agreed to attend a meeting of the committee on Monday, but only to announce the suspension of their participation, said Ould Sidati.

International mediators in Mali voiced concern over the country's "deteriorating security situation" in a statement, urging "strict compliance" with the peace deal.

The move highlights the fragility of the deal which seeks to end decades of ethnic divisions and uprisings by Mali's Tuareg, a traditionally nomadic people whose 2012 rebellion sparked a coup and plunged the country into chaos.

The Tuareg allied with Al-Qaeda-linked groups to seize towns across Mali's north, but they were cast out by the extremists who installed a brutal form of sharia law in towns under their control for 10 months until they were ousted in a French-led offensive.

Bamako has yet to gain full control of the north which is overrun with competing armed groups and remains threatened by a jihadist insurgency.

The Algerian-led mediation team condemned the recent "flagrant violation" of the peace accord after a meeting with the Malian government late Sunday and demanded the warring parties immediate return to the positions held on June 20 when the accord was wrapped up.

In a statement the mediators called for the implementation of "confidence-building measures, notably the freedom of people detained" during the recent fighting.