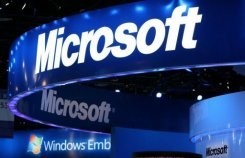 "Microsoft is at the top of the list because it believes that spreading a trust-based culture is the right way to do business, independent of size, national culture or industry," said Jose Tolovi of Great Place to Work.

No Asian companies made the list. "Asia is still a relatively new area for us," Tolovi told Agence France Presse by email. "We expect that Asia-based multinationals will show up on future Great Place to Work world's best lists."

American Express, in 12th spot, was the only financial institution to make the grade, at a time when big banks are coming under fire from the Occupy Wall Street movement and its global offshoots.

The rankings were based on opinion surveys of employees in 45 countries about their workplace culture and on questionnaires to human resources departments about their policies and practices.

"These companies are very good examples of profitable businesses built in conjunction with their employees and not in spite of them," said Tolovi, who is global chief executive of Great Place to Work.

While Great Place to Work, based in San Francisco, advises corporations on how to become better workplaces, Tolovi said its rankings are not limited to its clients.