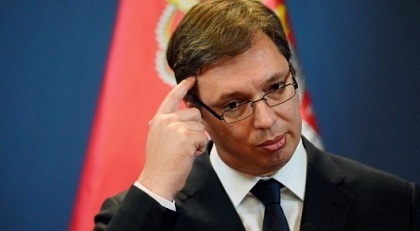 Serbia and Kosovo voiced satisfaction Wednesday with an EU-brokered deal on several key areas that represents a major step forward in normalizing ties between the former foes.

"We have gained more than we hoped for," Serbian Prime Minister Aleksandar Vucic told national broadcaster RTS of Tuesday's agreement.

"I have no bad news, I am not dissatisfied with what has been accomplished," he said, adding that he would visit Kosovo in September to present the deal to ethnic Serbs.

"We are bringing good agreements that not only guarantee security but also keep the jobs" of Kosovo Serbs, Vucic said.

In Pristina, Kosovo leaders hailed the accord.

"We consider this agreement to be a great success, a success that will allow full sovereignty over the territory of Kosovo, including the north" where ethnic Serbs make up the majority, Mustafa told reporters.

In a separate statement, Kosovo Foreign Minister Hashim Thaci said: "Serbia agreed to sign documents where our country will be treated as the Republic of Kosovo."

"It's a form of acceptance," Thaci said.

Serbia and its ally Russia have persistently refused to recognize Kosovo's 2008 unilateral declaration of independence, recognized by more than 100 countries, including 23 out of 28 EU member states and the United States.

The agreement "represents landmark achievements in the normalization process," Mogherini said in a statement Tuesday.

The agreement comes two days before a major summit grouping leaders of western Balkan nations and Mogherini, amid concerns over a huge flow of migrants and refugees through the region and over Russian influence.

Serbia and Kosovo have had difficult relations ever since the 1998-1999 war that ended after Serbian forces withdrew from the territory following an 11-week NATO bombing campaign.

In 2013 Pristina and Belgrade signed an EU-brokered agreement to normalize ties which enabled Belgrade to start EU accession talks a year later.

Some 120,000 ethnic Serbs live in Kosovo, where 90 percent of the 1.8 million population are ethnic Albanians.

Two third of them live in enclaves scattered throughout the breakaway territory, while some 40,000 make up the majority in the northern area that borders Serbia.