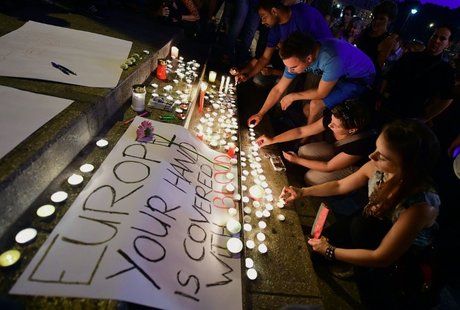 Four suspects in Austria's migrant truck tragedy were remanded in custody for another month in Hungary on Saturday, as a "horrified and heartbroken" U.N. chief called for concerted action to end Europe's refugee crisis.

Police believe the three Bulgarians and one Afghan held over the 71 deaths to be low-ranking members of one of the numerous human trafficking gangs that many of the tens of thousands of migrants coming to Europe pay for help.

Reacting to the gruesome Austrian find and a new Mediterranean shipwreck, U.N. Secretary General Ban Ki-moon said Friday that the migrant crisis is a "human tragedy that requires a determined collective political response."

"I appeal to all governments involved to provide comprehensive responses, expand safe and legal channels of migration and act with humanity, compassion and in accordance with their international obligations."

The abandoned truck, found Thursday on an Austrian motorway in the baking sun near the Hungary border, contained the tightly packed, decomposing bodies of 59 men, eight women and four children. They were thought to be Syrians.

Sparking revulsion across Europe, the tragic discovery highlighted the dangers faced by people fleeing conflict and hardship in the Middle East and Africa even once they reach Europe, with many putting their fate in the hands of profit-hungry people smugglers.

It came as yet another boat crammed with desperate migrants sank in the Mediterranean off Libya.

The coastguard hiked Saturday the death toll to 111 but said that "dozens" were still missing. A total of 198 among the 400 on board have been rescued.

The United Nations estimates 300,000 people have fled conflict and hardship in the Middle East and Africa for a better life in Europe this year, and 2,500 more have died in the attempt, mostly in the Mediterranean.

"My little sister, someone climbed on her back and pushed her down. When I saw her for the last time, she was underwater with him on top of her," Pakistani Shefaz Hamza, 17, a survivor who also lost his mother in the latest tragedy, told AFP in Libya.

In Hungary, the four men remanded in custody until September 29 include the truck's owner and drivers who allegedly picked up the migrants near the Hungarian town of Kecskemet, some 100 kilometers (60 miles) north of the Serbian border, last week.

Prosecutors said they want the four to stay in detention due to the "exceptional nature of the crime, the subsequent deaths of the smuggled persons and the perpetration of the criminal act of people-smuggling in a businesslike manner.".

The four suspects -- the Bulgarians are 29, 30, 50 and the Afghan 28 -- on Saturday declared their innocence and said they would appeal the court decision. Only one had legal residence in Hungary.

The discovery in Austria was a rare occurrence on land in a prosperous country when so many migrants have died at sea. Police said the people may have been dead for up to two days.

German Chancellor Angela Merkel, appealing together with Austrian Chancellor Werner Faymann for a swift reform of European rules to share out migrants more fairly among the 28-strong EU, called it a "warning" to Europe.

Faymann said Friday that EU subsidies to EU members that oppose such a move -- which include eastern members of the bloc and Britain -- should potentially be cut "to increase the political pressure".

An AFP reporter on the Greece-Macedonia border said migrants were continuing Saturday to cross in groups of 50, following the more than 100,000 to have trekked through the western Balkans this year, many bound for EU member Hungary.

"We estimate that some 1,500 people are able to cross the Greek border into Macedonia each day, though of course the situation changes every day," said U.N. refugee agency spokeswoman Stella Nanou.

One of them, Ali Younes, a 65-year-old from Baghdad, sold his home in Baghdad to pay a smuggler to reach Turkey through Syria. He risked his life in an inflatable boat to reach the Greek island of Samos from Turkey.

"I lived through everything: the Iran-Iraq war, the invasion of Kuwait, the sanctions period, the U.S. occupation, the sectarian war, and now Daesh," he told AFP, referring to the Islamic State extremist group controlling swathes of Iraq and Syria.

In Germany, meanwhile, which expects to absorb 800,000 asylum seekers this year, between 2,000 and 4,000 people took part in a demonstration in the eastern city of Dresden on Saturday to show solidarity with refugees, an AFP reporter said.

Accompanied by a heavy police presence with around 30 vans and officers in riot gear, slogans included "Avert the pogroms of tomorrow" and "Say it loud, say it clear, refugees are welcome here".

The nearby town of Heidenau, which has become a flashpoint for anti-migrant protests and where Merkel was booed last week, was calm overnight, although Germany's top court on Saturday overturned a ban on demonstrations there.

Interior Minister Thomas de Maiziere said in the Sueddeutsche Zeitung daily he was "proud that Germany is an open and tolerant country".