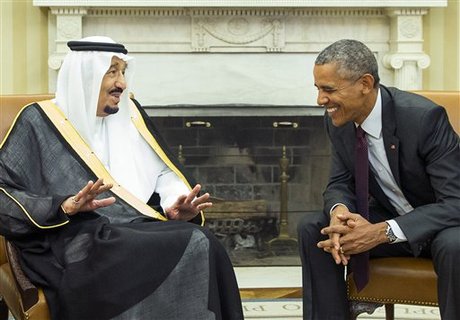 Obama made the rare move of greeting the 79-year-old monarch at the doors of the White House, as he hailed the "longstanding friendship" between the two countries.

Salman's inaugural visit as king -- originally scheduled for May and cancelled by Riyadh -- has been billed as a way of putting relations back on a more stable footing.

In the Oval Office, Obama was effusive, saying he wanted to "once again reaffirm not only our personal friendship, but the deep and abiding friendship between our two people."

For his part Salman said his visit was a "symbol of the deep and strong relationship that we have with the United States."

These meetings normally end in "some kind of public statement that puts as positive a spin as possible on the meeting," said Anthony Cordesman of the Center for Strategic and International Studies.

"Both nations are close strategic partners in spite of their differences, and both states need each other."

But behind the warm public statements, there are deep disagreements on Syria and Yemen as well as lingering Saudi doubts about the nuclear deal with Iran.

Obama acknowledged only that the two sides would have much to discuss.

"This is obviously a challenging time in world affairs, particularly in the Middle East," Obama said, saying the pair would discuss a "wide range of issues."

Obama said the two sides "share concerns" about the need to restore a functioning government in Yemen and relieve an urgent humanitarian crisis.

The United States has supported that effort, but has repeatedly warned about the impact the fighting has had on civilians.

Obama also said that the pair "share concerns about the crisis in Syria and will have the opportunity to discuss how we can arrive at a political transition process within Syria that can... end the horrific conflict there."

But Saudi Arabia's backing for opposition groups like Jaysh al-Islam, an amalgam of factions that include hardline Islamists, has concerned the White House.

"The kingdom sees the conflict against the Iranian-supported Assad regime as an extension of the wider Persian-Arab rivalry" said Simon Henderson of the Washington Institute for Near East Policy.

Ahead of the meeting senior Obama foreign policy aide Ben Rhodes said the White House wants to make sure both countries "have a common view" on which Syrian opposition groups get support.

"We are looking to isolate more extremist elements of the opposition, that's been an ongoing conversation with Saudi Arabia," he said.

thanks...for what is happenning to the Cristhians in Levant!!!..