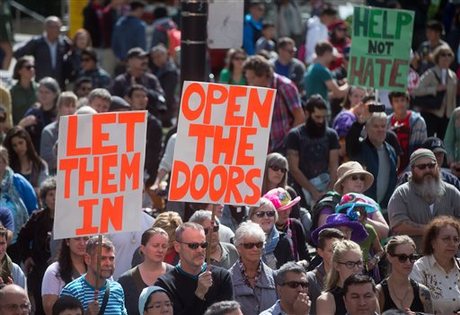 As hundreds of thousands of Syrian refugees languish in camps or risk their lives to reach Europe, questions are being asked about why wealthy Gulf states have accepted so few.

By the end of August, more than four million Syrians had fled their country but very few if any refugees have been officially accepted by the six countries of the Gulf Cooperation Council.

Bahrain, Kuwait, Oman, Qatar, Saudi Arabia and the United Arab Emirates have donated billions to help refugees, but are facing increasing scrutiny for their apparent unwillingness to accept migrants.

Why, ask many, as one of the greatest migration crises of modern times unfolds, are fellow Arab countries, with similar cultural and religious values and a relative proximity compared to Europe, doing little to help resettle people?

And, crucially, that criticism is being voiced not just in the West, but within the region itself.

In recent days, social media users in the Gulf have employed various hashtags including "#Welcoming_Syria's_refugees_is_a_Gulf_duty" to voice their disgust with the perceived inaction of GCC states.

"The Gulf countries have to be ashamed when they see Europe's doors open to Syrian refugees, while they close before us," Abu Mohammed, a 30-year-old Syrian refugee now living in Jordan, told AFP.

An influx of Syrian refugees has swamped Europe this summer, with Germany alone expecting 800,000 new asylum applications this year and efforts under way to organise the relocations of tens of thousands more.

But in the oil-rich Gulf, GCC states have been absent from talk of helping with the refugee crisis.

"Tragically, the cash-rich Gulf countries have not yet issued a statement on the crisis –- much less come up with a strategy to help the migrants, who are overwhelmingly Muslim," Qatar's Gulf Times newspaper wrote in a recent editorial.

Sultan Al Qassemi, a prominent Emirati blogger, wrote that the time had come for Gulf countries to take the "moral, ethical and responsible step" of changing their policy towards accepting refugees.

Even the distraught father of Aylan Kurdi, the three-year-old Syrian boy whose body washed ashore in Turkey, said at the funeral of his wife and two children: "I want Arab governments not European countries to see what happened to my children and, because of them, help people."

Still, analysts say the outpouring of criticism is unlikely to bring about any quick changes in GCC countries, none of which has signed the UN Convention on Refugees setting standards for the treatment and rights of those fleeing to a new country.

"I don't see anybody doing a David Cameron, who U-turned in 36 hours," Michael Stephens, a Middle East research fellow at RUSI, told AFP, referring to reports the British premier is set to admit 15,000 refugees from Syria.

"The vast majority of Gulf citizens believe what their governments have done in Syria is the right thing."

The Gulf nations have hardly stood on the sidelines during Syria's conflict, providing significant financial assistance to refugees in Lebanon, Jordan and Turkey.

At the same time they have been among the most ardent opponents of President Bashar al-Assad, backing the mainly Sunni rebels who have risen up against his regime, which is supported by their Shiite regional rival Iran.

GCC states have also provided funds and weapons for rebel groups fighting Assad -- leading to some accusations that they are backing shadowy extremists.

But when it comes to allowing in refugees, domestic concerns seem preeminent, even though many of the refugees are Sunni Muslims like the majority of people in the Gulf.

Smaller Gulf countries like the UAE and Qatar, where millions of foreign workers already vastly outnumber local citizens, fear being overwhelmed by refugees.

Security concerns are also paramount for countries like Saudi Arabia that have been targeted in attacks by the jihadist Islamic State group operating in Syria and Iraq.

And an influx of large numbers of refugees could upset stability in countries with little grassroots political activity.

"The countries of the Gulf are involved in the politics of Syria and they would probably worry who would come into their countries and what they would be involved in once they are," said Sultan Barakat, a senior fellow at the Brookings Doha Center.

He said one move that could help those fleeing and appease critics alike would be to offer entry to family members of Syrians already in the Gulf.

Hundreds of thousands of Syrians live among the millions of foreigners lured by work opportunities to the Gulf states -- prompting some to argue that they are already helping those fleeing the conflict.

As one anonymous Syrian wrote recently on Facebook: "Saudi has no refugees but it hosts a million Syrians on visitor visas, in addition to the Syrian residents, (and) they get their health care and schools, and in some cases their rents from charities."

For some in the Gulf, the criticism should be directed instead at Western governments, saying it is their failure to fully back and arm those fighting Assad that is behind the refugee crisis.

This is one of the most disgusting issue in modern history. The reaction of the gulf monarchies to their Umma copatriots.

Sunnite Syrians are flocking by the thousands to Europe where in austria for example hordes of local christians met them on the border with food and drink, The christian pope asked every christian family who can afford it to host one syrian family. Even in far away iceland, a petition received 10000 votes to overturn a law that prohibits getting refugees.

Even poor Jordan, unstable lebanon and Dictatorial Turkey are hosting hundreds of thousands of refugees.

Compare that to Selfish arab countries, snug in their wealth,instead choose to hire million and million of people from the subindian continent, and not a single Syrian refugee. Even though Syrians are mostly your sunnite brothers.

GCC countries are disgusting. History will not forgive them. And their Karma will suffer as a result.