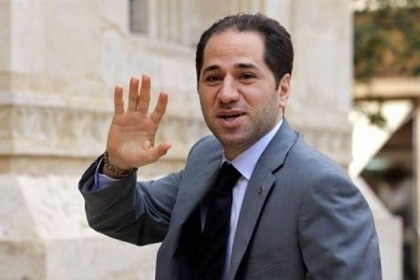 Kataeb leader Sami Gemayel has reportedly warned that his party's representatives would suspend their participation in the cabinet if it failed to resolve the waste crisis this week.

“We will have to suspend our participation in the government if no solution was found to the garbage (crisis) this week,” a source in the March 14 alliance quoted Gemayel as saying.

The source told pan-Arab daily al-Hayat published Monday that the Kataeb will also have to take a stance from the dialogue that Speaker Nabih Berri has called for if no agreement was reached on the priority of electing a president.

The Kataeb's possible withdrawal from the dialogue would lead to its failure because Berri has said that he would suspend his initiative if any party other than the Lebanese Forces announced its boycott of the talks.

LF chief Samir Geagea said on Saturday that his party will not attend the dialogue, which he described as a “waste of time.”

The talks will be chaired by Berri on Wednesday as the country reels from the waste crisis that erupted following the closure of Lebanon's largest landfill in Naameh in July.

The failure of the government to find an alternative landfill for Beirut and Mount Lebanon led to huge anti-government protests. Civil society groups are planning a similar demonstration on Wednesday to protest the all-party talks.

Economy and Trade Minister Alain Hakim, a Kataeb official, was not optimistic on the cabinet's ability to resolve the waste crisis anytime soon.

He told al-Liwaa newspaper that Prime Minister Tammam Salam will not call for a session this week.

sami
do you have any idea why flamethrower was banned?

Dialogue might work or fail, but as long as there is there is hope to get through the current stalemate responsibly & peacefully. But when there is no longer any dialogue, then the list of options is very short, and not very reassuring.
Things will remain frozen until they eventually blow up one way or another. If this is the path they chose, then they lose any right later to come complaining or trying to scare us about plunging into the "unknown" as Salam did to justify staying glued to his post.
Sort it out guys and do it fast, or the people is going to sort you out, and I have a feeling you wont like what happens then.

@mowaten E-X-C-E-L-L-E-N-T. Still laughing since the day you declared with a straight face you were a shiaa atheist and also a member of hezbollah with only one account. I think i will also continue to laugh at your statement "I have a feeling you wont like what happens then. ". Thank you Thank you

you know what is strange mowaten.... I was thinking the same thing exactly, the same!!!! The similarities between us are not just coincidences anymore. I mean we are both shiaa extremists who pretend to be secular and we both are members of the shia resistance, both paid to post, both are sectarian to the bone, both troll and make up accounts to insult people and then pretend we are against such practices.... I hope just because we are similar in all the above ways people don't think we are the same poster.

Mowaten, for once pretty much of your post makes sense and good reading as well. Even though I am so reluctant to recognize Nabih Berri's authority, I still feel that when a good opportunity is manifested, we should all take it and without any procrastination, we must all do it for the good of our dear nation. But in your usual ways, you ended a good post with your usual stick, so common of a Hezbollah partisan, the stick you see is fragile these days and is but a relic of times gone by. Anyway, all in all, your post was just a tad short of excellent.

Well I'm glad we agreed on this Phoenix, I was actually suprised by your answer on the other article (http://www.naharnet.com/stories/en/189189-parliament-vicinity-a-military-zone) because it was basically the same point I was making, only more briefly...

As for the stick you mention, I was referring to the people's stick, and it is directed at all politicians. It's not a threat I make, it's the reality we are seeing on the ground and the YouStink movement. Politicians have little time to fix things up before it's too late for them, all of them.

No one wants to sit with a revolver on his head.

a revolver is not the issue, it is the 80,000 rockets pointed at our homes and families.

"pointed at our homes and families" >> are you israeli?

Ebola is the cause of our problems.

Tony, it's been 5 years now that Hezbollah has been profoundly involved in the Syrian war, and has been losing ground together with the regime. Shouldn't these rockets have been used to push back their combined enemies in Syria? I wonder.

politics is not genetically transmitted....

He heard how much Gea Gea got from the Qatari's for boycotting dialigue, now he wants the same!

I do agree now after what we have witnessed recently that the poeple's patience is wearing thin and they will take matters into their own hands because none of these political leaders are capable of governing and addressing the country's problems.

Berri would do everyone a favor and redeem himself a little by resigning and encouraging other dinasours mafia heads (Jumblatt and Aoun) to also resign paving the way for new elections with fresh young faces.