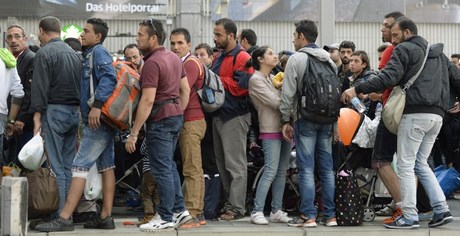 Germany said it was reinstating border controls on Sunday as Europe's top economy admitted it could no longer cope with a record influx of refugees.

The announcement came on the eve of a key EU meeting on the crisis, with interior ministers set to lock horns over a controversial plan to spread migrants across the continent.

Despite an outpouring of public sympathy for the plight of the refugees, many of whom are from Syria, several eastern European countries have already warned they will oppose any binding quotas on absorbing asylum seekers.

As Germany struggled to cope with a stream of migrants pouring in from Austria, the interior minister announced the immediate reintroduction of temporary border controls, apparently backtracking on Chancellor Angela Merkel's earlier decision to throw open the country's doors to Syrian refugees.

The move effectively suspends Germany's participation in the bloc's borderless Schengen system, one of the cornerstones of the European integration project since it was created in the 1990s.

"The aim of this measure is to stop the current influx to Germany and to return to an orderly process," Thomas de Maiziere said, as the city of Munich recorded an influx of 63,000 asylum seekers in two weeks.

Asylum seekers must understand "they cannot chose the states where they are seeking protection," he told reporters.

The announcement was quickly welcomed by Hungary's hardline Prime Minister Viktor Orban, whose own country is building a fence along its border with Serbia to keep migrants out.

"We have great understanding for Germany's decision and we voice our full solidarity," he told Bild newspaper. "We understand that this decision was necessary in order to defend Germany's and Europe's values."

In the wake of Berlin's move, the Czech Republic said it would take similar action on the border with Austria.

The measures came as tragedy struck again off the coast of Greece, with 34 more migrants -- among them babies and children -- drowning when their overcrowded wooden boat capsized in high winds.

As the continent scrambles to respond to the biggest movement of people since World War II, sharp divisions have emerged among the European Union's 28 member states.

While Germany and France back proposals to help "frontline" states Italy, Greece and Hungary, European Commission plans for sharing 160,000 new arrivals in a quota scheme are facing resistance from member states Hungary, the Czech Republic, Slovakia and Romania.

Czech Prime Minister Bohuslav Sobotka insisted his country would never accept compulsory quotas, saying the system "won't work", while Slovakia said it would try to block against any such binding measures at Monday's meeting.

Hungary, which reported a new record in migrant arrivals -- 4,330 on Saturday -- was working around the clock to finish a controversial anti-migrant fence on its frontier with Serbia by Tuesday, when tough new laws will take effect that mean anyone crossing the border illegally can be deported or even jailed.

Under EU rules, the first country of entry is required to deal with an asylum seeker's request for protection, but Germany had waived the rule for Syrian refugees.

While earning praise for its welcoming stance, Germany's local authorities buckled under the sudden surge of migrants at the end of an exhausting and often perilous journey.

In Munich, overwhelmed local authorities said they were stretched to capacity, with more than 13,000 migrants arriving in the city on Saturday alone.

"Given the numbers from yesterday, it is very clear that we have reached the upper limit of our capacity," said a Munich police spokesman.

Merkel, whose country is taking in the lion's share of new arrivals, bluntly warned last month that the passport-free Schengen zone of 26 countries was under threat.

"If we don't arrive at a fair distribution then the issue of Schengen will arise -- we don't want that," she said.

The image of hundreds of German police mobilizing to carry out border checks piles on the pressure ahead of Monday's emergency meeting of interior ministers on the  divisive EU proposal to introduce compulsory quotas for refugees.

"The German decision of today underlines the urgency to agree on the measures proposed by the European Commission in order to manage the refugee crisis," the EU said.

In Greece, on the frontline of the massive surge of people trying to reach Europe, the coastguard said 34 people -- including four babies and 11 young children -- perished when when their boat capsized off the Aegean island of Farmakonisi.

The latest tragedies follow the death of a Syrian toddler whose lifeless body was photographed washed up on a Turkish beach last week, becoming a heart-wrenching symbol of the plight of refugees fleeing war.

Merkel herself had called Saturday on Athens to make more effort to protect the EU's external borders.

The Organization of Islamic Cooperation was also due to discuss the crisis Sunday.

While Jordan, Lebanon and Turkey are housing millions of refugees from Syria, many wealthy Gulf states are facing increasing scrutiny over their apparent reluctance to take in people fleeing the conflict.

The International Organization for Migration said Friday that more than 430,000 people have crossed the Mediterranean to Europe this year, with 2,748 dying en route or going missing.

EU should be dissolved before its too late.