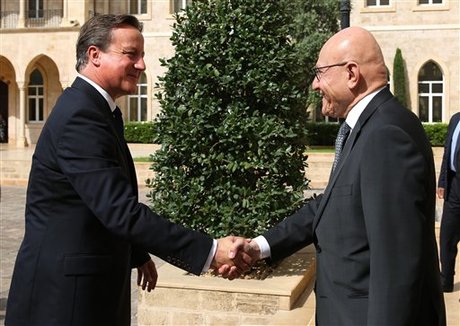 British Prime Minister David Cameron inspected on Monday Syrian refugees in the eastern town of Terbol and later met with PM Tammam Salam to throw his support behind the Lebanese government.

Cameron said at a joint press conference with Salam at the Grand Serail that the UK will continue to assist Lebanon against the Islamic State extremist group and to provide aid over the refugee crisis.

He said the UK wants to see a strong Lebanon and the election of a new president.

Salam thanked Cameron's government for assisting the Lebanese army and for helping Lebanon's education sector and said he told the visiting PM about the heavy burden of Syrian refugees on Lebanon particularly that not all pledged international assistance has reached the country.

During his visit to the refugee encampment, Cameron said his trip is aimed at seeing and hearing "stories of refugees and what they need."

"Britain is already the second largest donor to refugee camps to this whole crisis, really helping in a way that many other countries aren't with serious amounts of money," he said.

"We will go on doing that including increasing the amount of money we are giving to educate Syrian children here in Lebanon and elsewhere. I think that's absolutely vital."

Cameron's several hour visit to Beirut comes against the backdrop of the rise in the number of refugees escaping to Europe to start a new life.

He said earlier this month that Britain will take in up to 20,000 refugees over the next five years.

Britain on Monday announced it had appointed a minister to deal specifically with the 20,000 refugees.

London has accepted 216 Syrian refugees over the past year and granted asylum to almost 5,000 Syrians since the conflict broke out in 2011 -- far fewer than other European countries like France, Germany and Sweden.

Lebanon hosts around 1.5 million Syrian refugees — equivalent to more than a quarter of the country's entire population. But there are no formal camps here, so unofficial encampments have cropped up in fields or abandoned construction sites. While somewhat better-off refugees find other accommodations, the poorest end up in the encampments, relying on diminishing U.N. cash and food vouchers to survive.

French President Francois Hollande is also expected to visit Beirut next month to tour a Syrian refugee encampment and meet with Lebanese officials.

More than 250,000 people have reached Greece so far this year in a dramatic rise from last year, the vast majority arriving by boat to islands from the nearby Turkish coast. It's the first step in their journey across the continent to Western Europe as they flee war, persecution and poverty in the Middle East, Africa and Asia.

Cameron's office meanwhile released details of how an additional package of 100 million pounds ($153 million, 137 million euros) for Syrian refugees, which he announced last week, will be spent.

Forty million pounds of it will be allocated to the United Nations and other non-governmental organisations working with refugees in Jordan, Lebanon and Turkey.

"For thousands of refugees this money means a meal for their families, the security of a home with basic sanitation and clean water," Cameron said.

"Without our investment in international development, the numbers of people seeking to embark on a perilous journey to Europe would be far greater."

yet khamenai wrote a book recently on his plan to eliminate Israel, the Zionist enemy;)

Mr. Cameron, with all due respects to you and your government, the issue is a much larger one than the efforts you're trying to deploy. The Syrian revolution was quite a clear cut one, until western and Gulf state governments decided to create another fiasco in the region. I am one who subscribes to the point of view that these governments created this evil known as ISIL or IS. Not to complicate matters too much, kills the disease you created, then solutions will begin to manifest themselves soon after. IS is now heading on its way to Europe via refugees, soon you will begin to get a taste of our realities if you people wish to constituent singing "Mary has a little lamb..." forever. Please avoid a repeat of that typical characteristic Europe suffers from of which a notorious precedent was exampled at the onset of WW2.

southern, you can hardly read or write yet you always manage to get vote after vote. I don't get it !