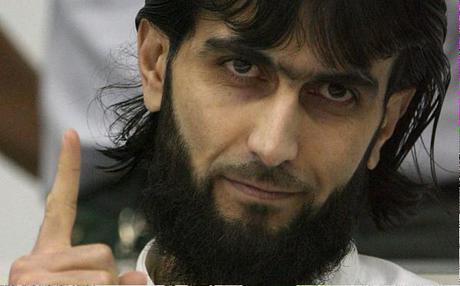 An Iraqi man with a jihadist background who stabbed a German policewoman before officers shot him dead in Berlin was presumed to have "acted alone", prosecutors said Friday.

Rafik Mohamad Yousef, 41 -- who had done jail time for a 2004 Berlin assassination plot against former Iraqi prime minister Iyad Allawi -- had a history of aggressive and unstable behavior, recently threatening a judge and other public officials.

"We are presuming he acted alone," rather than as part of a wider attack plot, said Berlin prosecution service spokesman Martin Steltner.

"We don't have new information on what may have been the man's motive," he added.

"We are checking his background and whether he was in contact with other Islamists," he said, as police were checking documents seized from the man's home.

Yousef on Thursday severed an electronic ankle monitor he had been ordered to wear, triggering an alarm that sent police speeding to his home.

Before they arrived, he went out to threaten passers-by in his western Berlin district, until four police patrol cars arrived.

In the ensuing confrontation, he stabbed a 44-year-old policewoman in the neck before one of her colleagues shot him dead, also accidentally hitting the female officer. Her condition was described as stable Friday.

Hours after the attack, authorities said he was "a suspected Islamist" who had remained under police watch following his release from an eight-year term, including time served while on trial.

He had been convicted in 2008, along with two other Iraqis, of plotting to kill Allawi and belonging to a foreign terrorist organization, the Iraqi militant group Ansar al-Islam.

Since his release, he had again drawn attention with aggressive behaviour against police and by making "jihadist threats" against a judge, for which he was charged in June and was set to face court again.

Yousef had also told an immigration officer that "we will behead you," reported national news agency DPA.

In his trial, presiding judge Christine Rebsam-Bender had described Yousef as "hot-tempered and aggressive" and cited his frequent outbursts, including an attack on a prison guard that broke the officer's rib.

His former defense lawyer, Reinhard Kirpes, told public radio after the shooting that he had always considered Yousef as tense and psychologically unstable.

"I had the impression back then that he was in a psychological gray zone ... to a degree he had lost touch with reality," Kirpes said, adding that "I'm not surprised that he met a violent end."