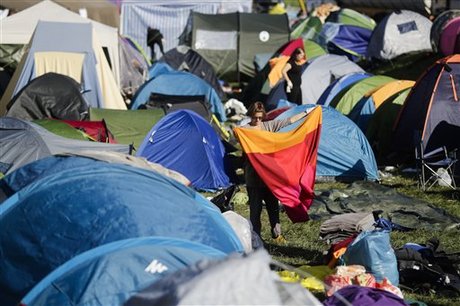 Germany's interior minister on Monday urged Europe to pick up refugees directly from crisis regions, to help them bypass traffickers who charge huge sums for dangerous journeys to the continent.

"I suggest we agree on a generous quota in which we take refugees from crisis regions to Europe without allowing people smugglers to profit from it," said Thomas de Maiziere at a press conference in Berlin, adding that he was expressing a personal view.

"It should be a generous quota so that Europe can fulfil its humanitarian obligations," the interior minister said.

Any additional refugees must be saved from the risk of drowning in the Mediterranean while they travel to Europe, said the minister.

"They would not be brought to Europe but to safe locations, with our support, so that they could live in safety," he said.

"That is a European approach befitting of European asylum standards," he added.

Nearly 2,750 people, including children and babies, have perished in the Mediterranean since the start of the year, as the often overcrowded and rickety vessels taking them to Europe have capsized.

On a visit to a refugee camp in Jordan last week, British Prime Minister David Cameron said his country would be taking 20,000 Syrians "straight out of refugees camps here in Jordan and elsewhere, and giving them a home in our country".

But he also stressed that "it's so important to keep people close to their homes" rather than letting them embark on perilous treks across the Mediterranean and Europe.