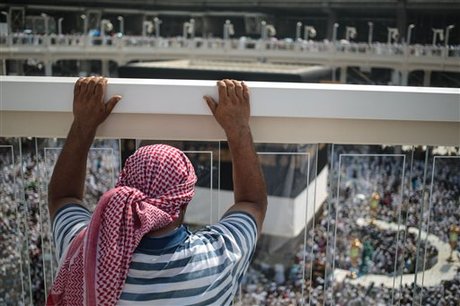 Saudi Arabia's decision to sanction the Binladin Group over the deadly Mecca crane collapse has come as a shock and could have serious consequences for one of the kingdom's most powerful firms.

After decades of thriving on lucrative government contracts, the Saudi Binladin Group is facing unprecedented scrutiny over the accident, which saw one of its cranes topple during a major expansion of the Grand Mosque in Mecca, Islam's holiest site.

The September 11 accident killed 108 people and injured about 400, including foreigners who had arrived ahead of the annual hajj pilgrimage which begins on Tuesday.

A Western diplomat in the kingdom said authorities were "embarrassed" by the accident and expressed surprise that the company was sanctioned only a few days later.

A preliminary investigation found that the group was partly responsible for the accident as the crane was incorrectly positioned when high winds struck.

Salman ordered prosecutors to prepare an indictment but also took immediate steps -- suspending the company from new public contracts and forbidding its executives from leaving the country, pending the completion of judicial processes.

Analysts said the sudden punishment of the firm was astounding given its huge size and longstanding ties with the Saudi authorities.

"It is shocking," said one Saudi analyst who did not want to be named, saying any moves to cause significant damage to the company would be like "America destroying General Motors".

Analysts said it was unclear how much of a long-term impact the accident would have on the firm, but it stands to suffer if the government turns against it.

The privately held Binladin Group is deeply embedded in the Saudi economy, though exactly how much it contributes is not known.

"Like most things in Saudi Arabia, its operations and finances are very opaque," said Jason Tuvey of Capital Economics, a global economics research company.

From unglamourous origins carving roads through the kingdom's mountains and deserts, the Binladin Group has become one of the largest building firms in the world.

"They are very much embedded in the economy, very well-connected," said another contractor with long-term experience in the local market.

From universities to airports to hospitals, the Jeddah-based firm has won government projects across the kingdom.

It has developed landmarks including the domed Faisaliah Tower in central Riyadh and the Mecca Royal Clock Tower, the world's third-tallest building.

The firm is also the primary contractor on Jeddah's $1.2 billion Kingdom Tower, which is to be the world's tallest building at more than one kilometre (almost 3,300 feet) high.

Attempts to reach company executives for comment were unsuccessful.

Analysts will now be watching the investigation to see if the group may be in danger of falling out with authorities.

Even before the accident, rumors had been swirling of potential unhappiness with the group.

A widely followed Saudi "whistleblower", who uses the Twitter handle @mujtahidd, wrote in August that "the fate of the Binladin company is unclear".

"There are a lot of competing business interests here," the Western diplomat said.

A quick resolution of the investigation without major action against the firm would suggest authorities simply wanted to be seen as decisive after the accident, the diplomat said.

But if the probe drags on and the company continues to be sidelined, "there's probably business interests caught up there somewhere."