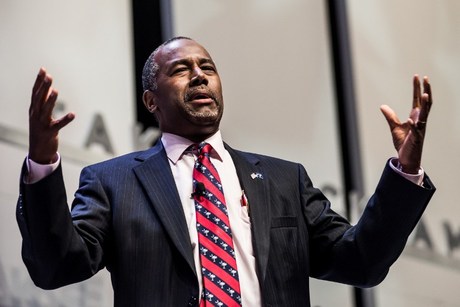 The question has suddenly emerged as a test of U.S. White House hopefuls: can a Muslim be president of the United States?

The Republican contender Ben Carson ignited a storm of controversy at the weekend, by stating that he saw Islam as incompatible with the charge of head of state.

"Can a Muslim be President of the United States of America? In a word: Yes. Now let's move on," Clinton said on Twitter.

She attached to her tweet an extract of the fourth article of the U..S Constitution which read, "No religious test shall ever be required as a qualification to any office or public trust under the United States."

That clause was questioned by Carson this weekend.

"I would not advocate that we put a Muslim in charge of this nation. I absolutely would not agree with that," the retired neurosurgeon said Sunday on NBC.

Carson later confirmed his stance, telling The Hill newspaper that the next president should be "sworn in on a stack of Bibles, not a Koran."

In response, the Council on American-Islamic Relations asked Carson to withdraw from the race Monday, saying he was "unfit to lead because his views are in contradiction with the U.S. Constitution."

Republicans were split in their response. Senator Ted Cruz disagreed with Carson's stance, saying, "I am a constitutionalist."

Senator Lindsey Graham said on Twitter that "America is an idea, not owned by a particular religion" and that Carson's statement showed he was not qualified to be president.

But Republican frontrunner Donald Trump was more ambiguous. When asked whether he would be comfortable with a Muslim as president, told NBC on Sunday, "I don't know if we have to address it right now, but I think it is certainly something that could happen."

The controversy erupted Thursday when Trump, who like Carson has not held elected office, failed to correct or interrupt a supporter who told him, "We have a problem in this country. It's called Muslims."

The supporter then asserted that President Barack Obama is a Muslim, a false claim first aired four years ago and still believed by 29 percent of Americans according to a recent poll.

Trump has defended his lack of pushback since.

"I've never had a problem with Muslims," he told NBC on Monday. "I assumed he was talking about the radical Islam."

Repeating comments he made on Sunday, Trump said he has "many friends" that are Muslims.

"I know so many Muslims that are such fabulous people," he said Sunday. "The fact is, there is a problem with some, and it's a very severe problem and it's a problem that's taking place all over the world."

Long before setting his sights on the presidency, Trump stoked right-wing conspiracy theories in 2011 as a leading proponent of the notion that Obama may be a Muslim and born outside the United States.

Sunday, he would say only that he takes Obama "at his word" that he is Christian.

Other candidates have grown increasingly frustrated with the resurrecting of old controversies.

Asked about Trump's punting on the question of Obama's religion Sunday, Senator Marco Rubio, polling fourth among Republican White House candidates, said the issue was "a big waste of time."