Scandinavia, Germany in with Migrants, Southern Europe out 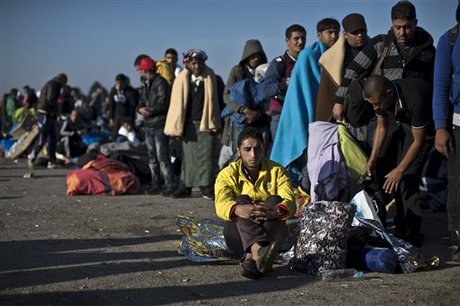 The European Union may have reluctantly agreed to share out 120,000 refugees among most of its 28 member states, but many migrants know exactly where they want to go: northern Europe... and only northern Europe.

With the exception of Denmark, which has taken a hardline stance on the massive influx of migrants and refugees, Scandinavian countries are the panacea for many.

Hassan Torkmani, a 29-year-old Syrian perfume mixer, is taking his family to Sweden.

"We heard that the life there is really good, the salaries are good and there is work," he says as he waits for a bus at the Nickelsdorf border post in Austria.

Sweden registered 80,000 asylum requests in 2014 and almost 50,000 in the first eight months of this year, making it the EU country that has taken in the largest number of refugees as a proportion of its population.

Some Iraqis, though, prefer to go to neighboring countries like Norway or Finland.

"Sweden is good for Syrians but not for Iraqis, I read that on Facebook," an Iraqi asylum seeker said recently in Helsinki.

A total of 54 percent of Iraqi requests for asylum were granted in Finland in the first six months of the year, compared with 33 percent in Sweden.

"I looked up (the possible destinations) before leaving and saw that the delay to obtain your rights is quite short, six months I think."

But all is not peachy.

Finland said last week it would step up its border controls with Sweden after an unexpected influx of mostly Iraqi asylum seekers, and anti-immigration protests have taken place in several towns.

"Syrians and Afghans, when you ask where they are going, they say Germany, Germany, Germany... It's just ingrained in their minds that you have to go to Germany," says Yasin Hatami, a 29-year-old Afghan who is waiting on a train platform in Vienna.

Many migrants and refugees have family or friends in Germany, and Europe's top economy is closer than Scandinavian countries for those already exhausted from their journey.

"I hope to be able to arrive in Germany soon as I have spent all my money," says Mohamed at the Beremend crossing on the Hungary-Croatia border, a 23-year-old Syrian from Damascus whose trip has cost him around 2,000 euros ($2,200).

Altogether, Germany -- which relaxed its asylum rules for Syrians -- expects to take in a record 800,000 refugees this year and Vice Chancellor Sigmar Gabriel has predicted that the number could rise to as high as a million.

Footage of the warm welcome given to refugees in Austrian train stations has put the country squarely on the map for some refugees, although it remains mostly a transit country.

Ahmad, a barber from Syria standing at the Bregana border post between Croatia and Slovenia, is hesitating between Austria and The Netherlands.

"I saw on TV that Austrians are a generous people. They say: 'Every home in Austria has room for a Syrian.' I also saw a man with a poster on his back saying 'Free Wi-Fi for Syrians, follow me'."

But France, despite its famed "freedom, equality, fraternity" motto, does not enjoy the same reputation, and rare are those who choose the country.

Many say France will not accept them, or fear a language barrier, preferring countries where English is more widely spoken.

Since the war broke out in 2011, only 7,000 Syrians have been granted refugee status in France, out of four million people who have fled the country.

Those who want to go have a special link with the country, like a former employee of French supermarket chain Carrefour in Damascus, or a Syrian musician transiting through Bregana.

"I heard it is a great place for art and artists," says Wael Noor.

"But I heard that in Paris, there are some dirty and dangerous places, is it true?"

Like Germany and Scandinavia, Britain is known for its robust economic health.

"There's work there and you can easily set up a business," says one Afghan, who has decided to go there despite the well-documented logjam in France's northern port of Calais, where hundreds of migrants have tried -- and many failed -- to get across the Channel to Britain.

Hassan, the perfume mixer, would have liked to go, but it's "too far away".

Britain has granted asylum to just under 5,000 Syrians since the conflict broke out, but Prime Minister David Cameron has now pledged to welcome 20,000 over the next five years -- albeit directly from refugee camps.

None of the migrants who spoke to AFP wanted to go to southern Europe, despite the fact that Spain is ready to welcome the third largest number of refugees in the EU relocation plan.

"They are poor people, they can't take us like Germany or Norway," 23-year-old Syrian psychology student Mahmud Haji says of Spain.

Omar Khaldi says he may go to Italy later... but not now.

"Italy is a beautiful country but they don't have a good economic situation."