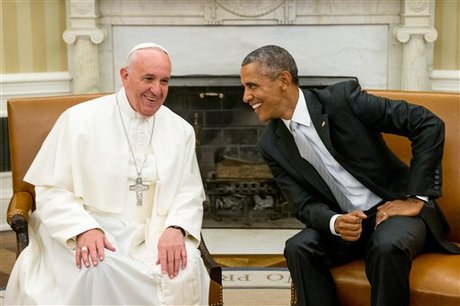 President Barack Obama and Pope Francis married their political and spiritual power to urge action on immigration and the environment Wednesday, during the popular pontiff's maiden White House visit.

America's first black president offered the first Latin American pope a stately and effusive welcome on the South Lawn, praising his moral leadership on issues that politics have struggled to address.

"I believe the excitement around your visit must be attributed not only to your role as pope, but to your unique qualities as a person," Obama said, praising Francis's humility, "embrace of simplicity" and generosity of spirit.

Though Pope Francis has inveighed against the materialism that the United States seems to embody like no other country, he is also a potential political ally for Obama, sharing many of his progressive goals and bringing along many of America's 70 million Catholics.

Speaking in fluent, if accented, English, the 78-year-old Argentine pontiff returned the warm blessings of his host and addressed Washington's bitter debate about immigration reform.

"As the son of an immigrant family, I am happy to be a guest in this country, which was largely built by such families."

Francis said he would address Congress "to offer words of encouragement to those called to guide the nation's political future in fidelity to its founding principles."

Obama lauded Francis for reminding the world that "the Lord's most powerful message is mercy."

"That means welcoming the stranger with empathy and a truly open heart, from the refugee who flees war-torn lands to the immigrant who leaves home in search of a better life," Obama said.

That joint message may also resonate strongly in Europe, which has been convulsed for months by an ongoing refugee crisis.

And as many U.S. conservatives question the very existence of man-made climate change, Francis and Obama made a de facto joint appeal for action on the issue.

"Holy Father, you remind us that we have a sacred obligation to protect our planet, God's magnificent gift to us," Obama said.

Francis took up the call.

"Accepting the urgency, it seems clear to me also that climate change is a problem which can no longer be left to a future generation," Francis said.

"When it comes to the care of our 'common home,' we are living at a critical moment of history."

He also invoked Obama's hero Martin Luther King Jr, saying, "We have defaulted on a promissory note, and now is the time to honor it."

The pope was afforded a full ceremonial welcome and a 40 minute one-on-one meeting with Obama in the Oval Office.

Obama himself had made an exceedingly rare ceremonial trip to the airport to meet the Argentine's plane Tuesday, bringing his wife, daughters, Vice President Joe Biden to underscore the special welcome.

But the White House said it held off a 21-gun salute that would not have chimed with the pope's stature of a man of peace.

That was the only expense spared during a historic first visit to the United States, and to Washington -- a political city that ordinarily shrugs its shoulders when presidents, queens and sheikhs roll through.

The visit was a political mirror of pope Benedict's 2008 visit to George W. Bush's White House. Those two leaders were as conservative as their current successors are progressive.

Still, the White House insisted it is not co-opting a holy man in order to batter Republican foes in Congress.

"The goal of the pope's visit, and certainly the goal of the meeting was not to advance anyone's political agenda." said White House spokesman Josh Earnest.

Francis has signaled he is unlikely to wade too deeply into America's bitterly fought politics.

The Vatican played a crucial role in brokering talks between Havana and Washington that led to the recent restoration of diplomatic ties after more than half a century.

But the pope told reporters that he would not specifically bring up Washington's embargo of Cuba in his speech Thursday before American lawmakers, who largely favor taking a tough line with Havana.

Congressman Paul Gosar, who is Catholic, declared he would boycott the pontiff's historic address to Congress to protest his "leftist" views.

Yet there is no mistaking the value of enlisting a popular pope's moral authority and offering him America's largest political platform.

Seven out of ten Americans have a favorable impression of Francis, according to a recent Washington Post-ABC poll.

After visiting the White House, the pope -- flanked by a massive security detail -- greeted adoring onlookers in the streets of the U.S. capital from his open popemobile.

He later addressed U.S. bishops and addressed the sex abuse scandals that rocked the Catholic Church, telling them to "work to ensure such crimes will never be repeated."

He was due later in the day to canonize a controversial missionary, Junipero Serra, during a mass at the Basilica of the National Shrine of the Immaculate Conception.

The pontiff will make two key speeches during his US visit, the address to Congress and another to the United Nations on Friday. Appeals on behalf of immigrants and climate change will be running themes, according to Vatican sources.

In New York, the symbolic home of capitalism, Francis will preside over an inter-faith ceremony at Ground Zero, visit a Harlem Catholic school and greet crowds on a procession through Central Park.

He will wrap up his historic six-day U.S. trip on Saturday and Sunday in Philadelphia at an international festival of Catholic families.

God bless our Pope Francis! Humble and loving... a true example for the world! I Love him! Please come to Lebanon and help cleanse us of our institutional corruption and rubbish.