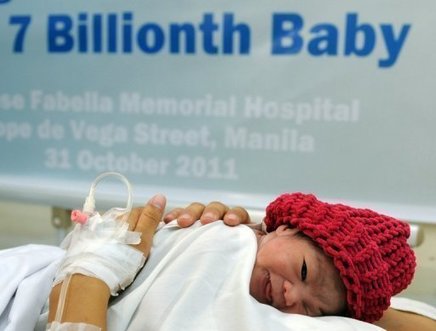 The world welcomed its symbolic seven billionth baby Monday amid a stark warning from U.N. chief Ban Ki-moon of the need to tackle inequality on a planet where almost a billion people go hungry.

"Our world is one of terrible contradictions," Ban told a press conference to mark the U.N. declaration that the world population has reached seven billion.

"Plenty of food, but one billion people go hungry. Lavish lifestyles for a few, but poverty for too many others," he said, highlighting famine in east Africa, the Syria unrest and Wall Street protests.

The United Nations said that by its best estimates the seven billionth baby would be born on October 31, and countries around the world have been marking the demographic milestone.

But any celebrations for parents, who were showered with gifts in some countries, was largely tempered by fears of the strain that burgeoning humanity is putting on the Earth.

He said he would take his message that world leaders need to battle inequality to the Group of 20 summit in Cannes, France this week and tell them that despite the international crisis "we cannot afford to cut loose those who are hardest hit."

"We cannot burn our way to the future -- at the cost of destroying our planet. And we have to empower women and young people. Around the world, they have taken to the streets demanding their rights, new opportunities and a voice in their future."

The Philippines was the first country to declare a seven billionth baby, a little girl named Danica May Camacho.

"She looks so lovely," her mother, Camille Dalura, whispered as she cradled her baby girl. "I can't believe she is the world's seven billionth."

U.N. rights chief Navi Pillay said in a statement marking the seven billion milestone: "From the moment the child was born, he or she -- like every other child born today or any other day -- should be guaranteed freedom from fear and want, protection from discrimination and abuse, and equal access to security, justice and respect as a member of the human family."

The birth comes at a time of great hope, Pillay said.

"The global awakening of 2011, which began in a town in Tunisia and spread to other towns and cities around the world, promises to restore the vision of the Universal Declaration of Human Rights of a life of freedom from fear and want for all, without discrimination."

The United Nations named a Bosnian child, Adnan Mevic, as the Earth's six billionth inhabitant on October 12, 1999, when then-secretary general Kofi Annan was pictured in a Sarajevo hospital with the child in his arms.

The Mevic family is now living in poverty -- which is one reason why no one baby was being singled out for the global spotlight this time. Instead a number of births were being marked throughout the day.

In Bangladesh, authorities named another baby girl the world's seven billionth child. Weighing 2.75 kilos and named Oishee, she arrived a minute after midnight at a hospital in the capital Dhaka.

"I'm so happy. I've become the father of a baby girl at a historic moment," her father Mohsin Hossain said.

In Cambodia the honor fell to a baby girl who has yet to be named. Weighing three kilos, she was born in the southern province of Preah Sihanouk, her parents' fifth child.

"I am very glad for her. She is the last child for us. I hope she will have good future. I had a dream that she would be the luckiest among my children," proud mother Pring Phal, 42, told Agence France Presse.

However Indian Health Minister Ghulam Nabi Azad said the birth of the seven billionth child was "not a matter of joy but a great worry."

"We shouldn't be celebrating," he said Sunday in an interview with The Times of India. "For us a matter of joy will be when the population stabilizes."

India's population, the world's second biggest at 1.2 billion, is set to surpass China's by 2025, according to the U.S. census bureau.

The world has added a billion babies -- or almost another China -- since Adnan Mevic was born. Having taken millennia to pass the one-billion mark, the world's population has now doubled in 50 years.

Mounting concern over humanity's environmental impact and fears that we may not be able to feed ourselves 100 years from now cast a cautionary tone over the buildup to Monday's milestone.

U.N. chief Ban Ki-moon told students at a New York school last week: "Seven billion people who need enough food. Enough energy. Good opportunities in life for jobs and education. Rights and freedoms. The freedom to speak. The freedom to raise their own children in peace and security.

"Everything you want for yourself -- seven billion times over."

With about two babies being born every second, the figure can only go up and up in the decades to come -- to more than 10 billion by 2100, according to U.N. estimates.

It also sounds alarms over how climate change and population growth are adding to drought and famine crises; the management of megacities like Tokyo; and ageing populations such as Europe's.

Children's rights group Plan International meanwhile noted that many births go unregistered, notably in parts of Africa, where as many as two-thirds are not recorded.

In Liberia, only 16 percent of children are registered, it said.