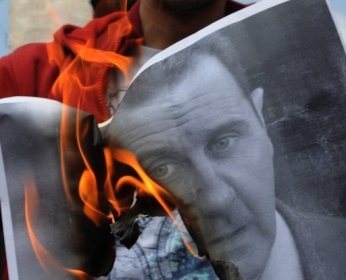 President Bashar Assad has gone from pariah to potential partner, bolstered by his allies Russia and Iran in Syria's four-year war and Western concern about the jihadist threat, experts say.

In power for 15 years, Assad is virtually the sole survivor of the Arab uprisings that have unseated rulers across the Middle East and North Africa.

Only months ago, Assad's forces were on the back foot, suffering a string of setbacks as the Islamic State (IS) group and an al-Qaida-led alliance encroached on territory long in their grip.

But now he appears to be reaping the rewards of a policy that brands all his opponents "terrorists" and presents his regime as a bulwark against extremism.

Assad has also had key support from his powerful allies Iran and Russia, who have provided military and financial assistance as well as diplomatic cover.

In recent weeks, Russia has sent troops and warplanes to Syria and made new arms deliveries to Assad's regime, prompting concern from opponents like Washington.

"I think that the Assad regime's temporary and Pyrrhic victory is a consequence of good old cynical realpolitik," said Karim Bitar, head of research at the Institute for International and Strategic Relations.

"Ultimately the Russians and the Iranians had much more at stake than the West, they remained mobilized, inflexible and intransigent while the opponents of the Assad regime didn't have a clear strategy and paid a heavy price for their trial and error method."

Since demonstrations against his regime broke out in March 2011, inspired by similar regional uprisings, Assad has presented his regime as fighting a war against "terrorists."

The emergence of the Islamic State group, and its capture of large swathes of territory, has served to reinforce the narrative of his government as a bulwark against "barbarism."

His claim has also been bolstered by the relative failure of a U.S.-led coalition against IS, which does not work with Assad, to make headway in pushing back IS or preventing it from further advances.

Bitar said Assad had been able to play for time and outlast the initial optimism of the Arab uprisings, which in some cases have produced lawless spaces ripe for radical groups.

"The Assad regime benefited from the triumph of the counterrevolutionary narrative at the regional level," he said.

"Most Western states resorted back to the flawed idea that authoritarian nationalism in the Arab world is the only bulwark against radical Islam."

Assad, who came to power in 2000 after the death of his father and predecessor Hafez Assad, has lost control of around two-thirds of Syria to fighters from IS as well as al-Qaida affiliate al-Nusra Front and other Islamist or moderate rebel groups.

But he has clung to strategic territory that is home to around 50 percent of the population, including Damascus, the central towns of Homs and Hama, his strongholds on the coast, and parts of Aleppo.

Perhaps his greatest asset has been the unwavering support of allies Russia and Iran, who have consistently rejected demands Assad step aside, and bolstered his regime with military and financial support.

"His opponents have been too divided and reluctant to get involved themselves or support the Syrian rebels in overthrowing him while his supporters have given him consistent and strong military, diplomatic and financial backing," said Muriel Asseburg, a senior fellow at the German Institute for International and Security Affairs.

Yezid Sayigh, a senior associate at the Carnegie Middle East Center think-tank, also said Assad's longevity is partly the consequence of inaction by his opponents, including the United States.

The West has also been rattled by the growing power of IS, and a wave of refugees from Syria who have arrived in Europe in recent weeks.

"What the Russians have done is a clever move.

"It has shifted the balance again, helped buy Assad some time, made the Russians look important, put the Americans on the defensive, and without actually changing much on the ground."

Sole survivor of the uprisings? Anyone forgot Bahrain?