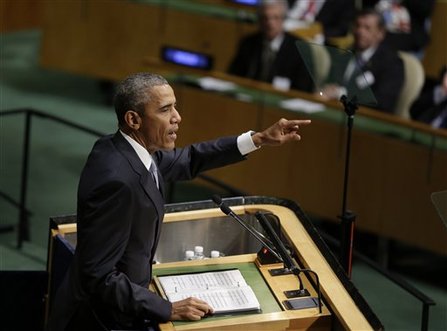 U.S. President Barack Obama insisted Monday that the sanctions Western powers imposed on Moscow in the wake of Russia's intervention in Ukraine were meant to protect Kiev's sovereignty not trigger conflict with Moscow.

"We cannot stand by when the sovereignty and territorial integrity of a nation is flagrantly violated," he said, addressing the United Nations General Assembly.

"If that happens without consequence in Ukraine, it could happen to any nation gathered here today.

"That's the basis of the sanctions that the United States and our partners impose on Russia. It is not a desire to return to a Cold War," Obama added.