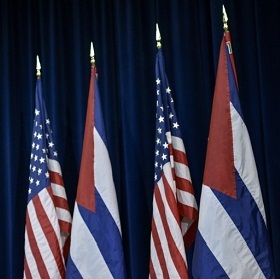 President Barack Obama on Monday called for ending the decades-old U.S. embargo on Cuba, in his address to the U.N. General Assembly.

Obama said he was confident that the U.S. Congress will "inevitably lift an embargo that should not be in place anymore," drawing applause from the 193-nation assembly.

Washington and Havana reestablished diplomatic relations in July after more than half a century of enmity.

But the U.S. embargo, which has been in place since 1960, remains a bone of contention as the Republican-held Congress balks at the administration's move to end the blockade.

Obama acknowledged that Washington's Cuba policy had "failed to improve the lives of the Cuban people" but stressed that human rights remained a concern in relations with Havana.

Obama spoke ahead of Cuban leader Raul Castro's first address to the U.N. General Assembly and a meeting is planned Tuesday between the two leaders, only the second since the thaw in relations.