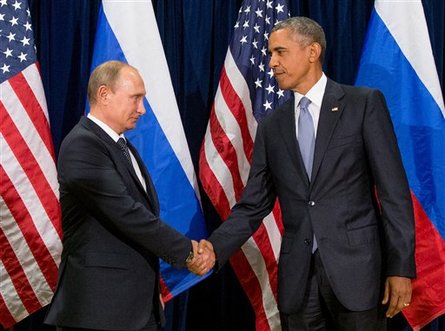 Russian President Vladimir Putin and his U.S. counterpart Barack Obama met Monday on the crisis in Syria but failed to resolve their dispute over the future role of Bashar Assad.

In dueling speeches before the U.N. General Assembly, Obama branded the Syrian leader a child-killing tyrant while Putin said the world should support Assad against the Islamic State group.

The Russian leader urged U.N. General Assembly members to unite to fight the jihadist group and warned that he plans to step up support for Assad's forces and has not ruled out air strikes.

The U.S. and Russian presidents clinked glasses and shook hands at lunch with UN Secretary-General Ban Ki-moon after their addresses, but nothing could disguise the gulf in their positions.

Putin and Obama later met for 90 minutes for talks the Russian leader dubbed "constructive and business-likes" and a senior U.S. official called a "business-like back and forth."

Putin appeared pleased that Obama had agreed to Russia having a role in the debate, and said: "In my opinion there is a basis to work on shared problems together."

Both leaders agreed there should be a process of political transition in Syria but, the U.S. official added, they "fundamentally disagreed" on the role of Assad.

"We have a difference about what the outcome of that process would be," he added.

In his first speech to the world body in a decade, Putin warned it was an "enormous mistake to not cooperate with the Syrian group which is fighting the terrorists face-to-face."

"We must address the problems that we are all facing and create a broad anti-terror coalition," he declared, proposing a Security Council resolution on a coalition to include Assad and Iran.

Obama said Washington was ready to work with Russia and even Iran against the Islamic State jihadists, but warned this must not mean keeping Assad in power in Damascus indefinitely.

"The United States is prepared to work with any nation, including Russia and Iran, to resolve the conflict," he said.

Rather than a bulwark against jihadist extremism, Obama argued, Assad drives Syrians into the arms of such groups by such acts as dropping "barrel bombs to massacre innocent children."

Not to be outdone, the Russian leader blamed the rise of violent extremism on the U.S. military interventions in Iraq and Libya, which he said unleashed chaos in the Middle East.

He argued that the IS group now running rampant in Syria and Iraq sprang out of the chaos left behind after U.S.-backed forces ousted Saddam Hussein from Baghdad and Moammar Gadhafi in Libya.

After the end of the Cold War, Putin argued, the West emerged as a new "center of domination" of the world and arrogantly took it upon itself to resolve conflicts through force.

This power led to the "emergence of areas of anarchy in the Middle East, with extremists and terrorists," he said.

Raids against the Islamic State group by the U.S.-led coalition of Western and Arab allies are illegal, he argued, because they were not requested by Syria nor authorized by the UN Security Council.

If there were a proper legal basis for air strikes, Russia had not ruled out taking part, he said later at a news conference.

"We are thinking about how to additionally help the Syrian army," he said. "We don't rule anything out. But if we are to act it will only be fully respecting international legal norms."

Some European powers are reportedly softening their stance, signaling Assad could stay on in an interim role, but France's President Francois Hollande stuck close to Obama's line.

"Russia and Iran say they want to be part of a solution," he said. "So we must work with these countries to explain to them that the route to a solution does not go through Bashar al-Assad."

In his speech, Obama did not specifically address Assad's fate in efforts to re-launch a bid to end a war that has left more than 240,000 dead since 2011.

But he declared that there could be no return to the pre-war status quo, when Assad held sway.

Putin scorned this stance, arguing that only the Syrian people could depose their leader and that Assad had agreed to begin a reform program to bring more people on board.

"I relate to my colleagues the American and French presidents with great respect, but they aren't citizens of Syria and so should not be involved in choosing the leadership," he said.

Moscow has put Washington on the back foot by dispatching troops and aircraft to the war-torn country and pushing reluctant world leaders to admit that Assad could cling to power.

On the ground, Russia has started putting the pieces together by agreeing with Iraq, Syria and Iran that their officers will work together in Baghdad to share intelligence on IS.