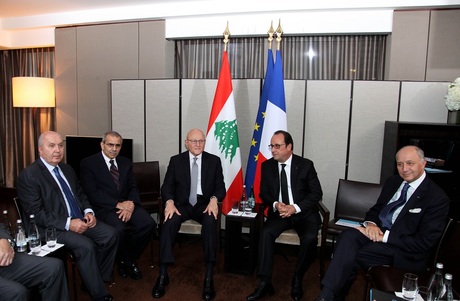 Prime Minister Tammam Salam has announced that French President Francois Hollande decided to postpone his trip to Beirut to ensure its success.

Hollande delayed his visit “probably to November until the circumstances that guarantee the success of the trip are available,” Salam said in New York.

“Hollande has not stopped making contacts concerning the presidential issue,” he said about the vacuum at Baabda Palace.

The presidential palace has been vacant since the term of President Michel Suleiman ended in May last year.

The Baabda deadlock has caused parliament's paralysis and huge differences among cabinet members on controversial issues.

Hollande had announced that he would visit Beirut after the end of the U.N. General Assembly session in New York.

Salam has been meeting with top Arab and world leaders on the sidelines of the session.

All because of a caporal corrupt and traitor...

eh sure, even your constipation is due to him

Whoever tries to reconciliate crazy people becomes mad himself.
This is a valid reason for Hollande not to come to Lebanon at all