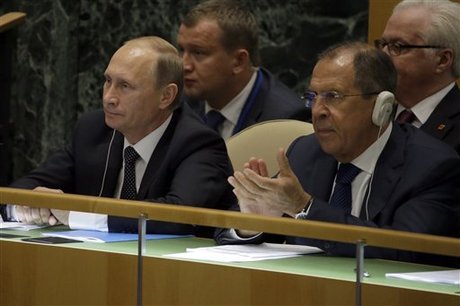 Moscow said on Tuesday that Russia and the United States intended to build upon a key meeting between Vladimir Putin and Barack Obama and look for ways to fight the Islamic State group.

The Russian president stole the show at the U.N. General Assembly on Monday, calling for a broad U.N.-backed coalition to fight Islamic State jihadists.

Ostracized by the West over Moscow's annexation of Crimea and support for a separatist insurgency in east Ukraine, Putin also pulled off a major coup by holding talks with U.S. President Barack Obama, their first formal bilateral in two years.

Russian Foreign Minister Sergei Lavrov said the two leaders had agreed to follow up their meeting with talks to find a common position on the Syrian conflict.

"It was a very constructive discussion," he said in an interview with Kremlin-backed RT television channel.

"We did not agree on any specific steps but what they did agree was to continue our cooperation, discussions between the foreign ministries, between the ministries of defense in order to identify ways and means, specific ways and means which could make our common goal more achievable."

"They did not discuss coalitions in the classical sense of the word," Lavrov added.

"What they did discuss was the possibilities for the United States and Russia to cooperate closely on the most burning issues of today, Syria first of all," he said in English.

Russia took the West by surprise by dispatching troops and fighter jets to Syria, sparking concern in Washington that Moscow might join the fighting alongside its Soviet-era ally President Bashar Assad.

"We all agreed that our common goal is to defeat ISIL, not to allow ISIL to establish the caliphate," Lavrov said, referring to the Islamic State group.

"Both Russia and the United States are absolutely determined not to allow them to succeed."