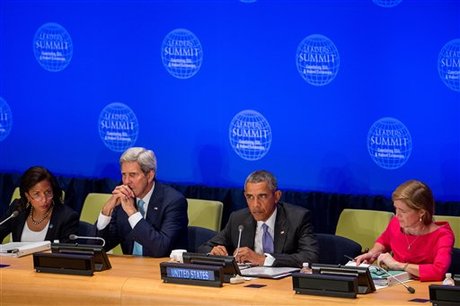 Moscow on Tuesday slammed the holding of a U.S.-led counter-terrorism summit at the United Nations, calling it disrespectful.

On Tuesday, President Barack Obama sat down with more than 100 leaders at the U.N. to push ahead with a U.S.-led campaign against the Islamic State group.

Russia was invited to the counter-terrorism summit but President Vladimir Putin is pushing a rival plan to create a broad U.N.-led coalition to fight the Islamic State jihadists.

"The U.N. has its own anti-terror strategy and everything could easily be done within the U.N. framework."

"But Americans would not be Americans if they did not seek to demonstrate their leadership," Churkin said.

"It is simply disrespectful towards the organization to conduct these things at the U.N.," he said.

Moscow was only sending a low-level diplomat to the talks, he added.

On Monday, Putin addressed the U.N. General Assembly for the first time in a decade, calling for a broad U.N.-backed coalition to fight IS jihadists.

Russia took the United States and its allies in a coalition bombing Islamic State fighters by surprise by dispatching troops and fighter jets to Syria as Putin seeks to muscle his way back onto the world stage after months of isolation over Ukraine.

Putin and Obama agreed to cooperate on fighting the Islamic State group but failed to resolve their dispute over the future role of Syria's Bashar Assad.

The Kremlin also said U.S. experts had refused to take part in the work of an intelligence task force Russia is setting up together with Iraq, Iran and Syria.