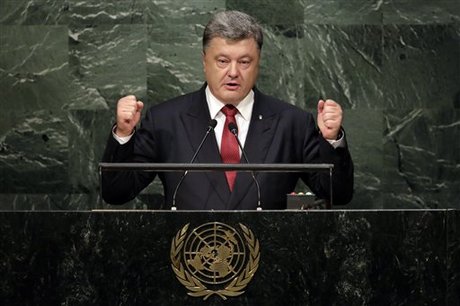 Ukrainian President Petro Poroshenko used his speech at the U.N. General Assembly on Tuesday to rail against Russian aggression, urging the world not to believe "conciliatory" statements from his counterpart Vladimir Putin.

The Russian leader called Monday for a broad U.N.-backed coalition to fight the Islamic State group as he seeks to muscle his way back onto the world stage after months of isolation over Ukraine.

Putin and U.S. President Barack Obama agreed to cooperate on fighting IS, in a coup for Putin as he tries to shake off Western isolation following his first address to the General Assembly in a decade.

However Moscow and Washington disagree sharply about the role of Syrian President Bashar Assad in efforts to end the Syrian war.

"We have heard conciliatory statements from the Russian side in which, in particular, it called for the establishment of an anti-terrorist coalition, or warned (against the danger of attempting) to flirt with terrorists," said Poroshenko.

"Cool story, but really hard to believe!" he told the UN.

"How can you urge an anti-terrorist coalition if you inspire terrorism right in front of your door? How can you talk about peace and legitimacy -- if your policy is war via puppet governments?

Putin has been ostracized by the West over Moscow's annexation of Crimea and support for a separatist insurgency in eastern Ukraine, and relations remain frosty.

On Tuesday, Moscow criticized the holding of a U.S.-led counter-terrorism summit at the United Nations as disrespectful and sent only a low-level diplomat to the talks chaired by Obama.