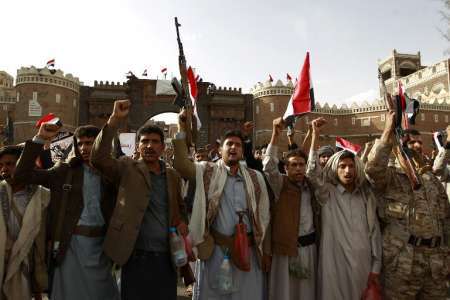 The Saudi-led coalition said on Wednesday it had seized an Iranian fishing boat in the Arabian Sea loaded with weapons destined for Shiite rebels it is fighting in Yemen.

A coalition statement said that the vessel was intercepted on Saturday and that 14 Iranians and weapons including anti-tank shells were found on board.

It said that papers found on board the boat showed that it was registered to an Iranian and was licensed for fishing by the Iranian authorities.

The vessel was seized 150 nautical miles off the Omani port of Salalah, the coalition statement said.

Saudi Arabia and its coalition allies have repeatedly accused their Shiite rival Iran of arming the Huthi rebels who control swathes of Yemen, including the capital.

But despite operating an air and sea blockade for the past six months, they have not previously come up with any evidence.

The coalition intervened in support of President Abedrabbo Mansour Hadi when the rebels advanced on his last refuge Aden in March, prompting him to flee the country..

In May, an Iranian boat headed to the rebel-controlled Red Sea port of Hodeida with 2,500 tonnes of aid was diverted to Djibouti following warnings from the coalition and the United States.

Wednesday's announcement comes with relations between Riyadh and Tehran at a new low amid a war of words over a deadly stampede at this year's hajj in which at least 239 Iranian pilgrims were killed.

Tehran accuses Riyadh of serious safety lapses and has questioned its fitness to continue organizing the annual Muslim pilgrimage.

On Wednesday, Tehran summoned the Saudi envoy to demand the swift identification and repatriation of the bodies of Iranian pilgrims killed in last week's stampede.

Iran fears that 241 of its nationals who are unaccounted for may be among the bodies that have yet to be identified.

Its supreme leader Ayatollah Ali Khamenei has demanded that Saudi Arabia apologize to the bereaved and to the world's Muslims.

Riyadh has accused Tehran of playing politics with tragedy.

.... and nassrallah and his boy scout mowaten keep telling us Iran is not interfering in Yemen nor is it arming the huthi traitors.

yea they're arming them with "Concourse shells" roflmao

besides have you seen the list of weapons? doesn't even qualify for a hunting trip, maybe a fishing trip max

on a more serious note, given the ongoing massacre of yemenis (including thousands of civilians) every country with a moral sense should be sending them weapons to defend themselves.
same as when israel was occupying lebanon and imposing its terror, it was Iran (+Syria) who supported us and gave us the means to free ourselves from their heinous intentions

it seems somebody told you when you were growing up that you were funny and you believed him.

what an effing hypocrite this mooowaten is... exactly what he denied the syrian people being massacred by assad... TFEH on you... you are a shame....

Nobody cares about your spam mowaten, how about you find a more honest (and more fulfilling) way to earn your daily iranian rials?

not the first ship and won't be the last.
Hit them hard without mercy

but mowaten has an article from the Huffington post that he always posts to show Iran is not supplying the houthis with weapons.?

heha mowaten has an article for everything. He is paid to post

The #1 evil in the world is Iran, they need to get rid of Iran and every shee3a out there. Death to Iran and death to Khomeini.

Let's see what their excuse will be