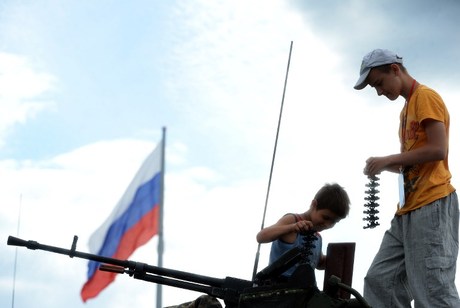 Moscow is revving up its publicity machine to sell the Kremlin's dramatic entry into the Syrian war to wary Russians who still harbor painful memories of the Soviet Union's disastrous venture into Afghanistan.

Russia on Wednesday waded into the hugely convoluted multi-front conflict in the Middle East, launching air strikes against what Moscow says are Islamic State militants in its Soviet-era ally Syria.

President Vladimir Putin said Moscow needed to quash terrorists before they cross into Russia but ruled out sending ground troops into Syria.

The Ukraine crisis and Russia's economic hardships have been all but pushed off the airwaves as television coverage puts Moscow's Syrian buildup center stage.

National television broadcast footage of Russian fighter jets taking off into the night sky in Syria and newspapers plastered pictures of warplanes across their front pages.

The air strikes in Syria are Russia's first major military engagement outside the former Soviet Union since the occupation of Afghanistan in 1979.

That 10-year conflict, which claimed the lives of more than 14,000 Soviet troops, has come to be seen in the country as a huge foreign policy blunder.

The public aversion to Russian military involvement overseas has been dubbed the "Afghan Syndrome."

Many Russians fear that history may repeat itself as the Kremlin rushes headlong into a distant theater of war amid mounting economic trouble at home following Western sanctions over Ukraine.

"Of course, I am afraid of a repeat of Afghanistan," Maria Bunina, a 62-year-old Muscovite, told AFP.

"Everything repeats itself -- only things could be even worse in Syria. It's so hard to understand what's going on there, the war is everywhere, everyone is fighting everyone."

Yelena Kostyuchenko, a reporter with opposition newspaper Novaya Gazeta, said on Facebook: "My mum called me crying: 'Why another war?'"

Since the Soviet breakup, Moscow sent troops into several neighboring states that it considers its sphere of influence, including a brief 2008 war with Georgia.

While most Russians welcomed the seizure of Crimea, which used to be part of Soviet Russia until 1954, and Moscow's support for Russian-speaking rebels in Ukraine, Syria may be a tough sell, experts say.

Lev Gudkov, director of the Levada Center pollster, estimated that only one in eight Russians supported the military intervention in Syria.

"Of course, this is the 'Afghan Syndrome' if not more so," he told AFP.

He added however that while few Russians fully understand the intricacies of the Syrian conflict, Putin's robust approval ratings will unlikely be affected in the short-term.

Russia's entry into Syria thrust Putin into the center of global attention after months of isolation over Ukraine, leading many to accuse him of being guided by self-interest rather than the interests of his country.

Less than a year after the Russian leader received an icy reception at a G20 summit in Australia, he stole the limelight at the United Nations General Assembly calling for a broad coalition to fight IS militants.

"This is the first time that the opinions of ordinary Russians and the ruling elite diverge."

Kalachev added that his father, a veteran of the Afghanistan war, did not support greater involvement in Syria either.

While the authorities said Moscow's involvement would be limited to precision air strikes against IS militants, some officials did not rule out extending the operation beyond Syria's borders.

"I apologize for the inappropriate comparison, but when you need to eradicate insects, it is not enough to send them into your neighbors' kitchen," Konstantin Kosachev, chairman of the foreign affairs committee at parliament's upper house, said on television.

Washington accused Russia of striking moderate rebels fighting against the Syrian leader Bashar Assad under cover of a claimed assault on IS militants.

Russian social networks, often seen as the last bastion of free speech in the country, exploded with ridicule for the Kremlin plan.

But many Russians welcomed Putin's move.

"The Islamic State is a disaster. The United States has created a monster that has got out of control," Mikhail Kosyrev, a 28-year hairdresser, told AFP.

"I approve of the start of the strikes. Why should we wait for them to come to us?" he said, echoing Putin's words.