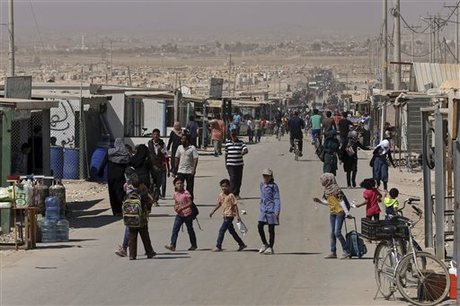 Growing numbers of Syrian refugees are returning to their war-ravaged homeland from Jordan because they can't survive in exile after drastic aid cuts, can't afford to pay smugglers to sneak them into Europe or are simply homesick.

The returns, along with the increasing migration to Europe, signal that conditions in regional host countries have become increasingly intolerable, the refugees and aid officials said.

"We stopped getting any aid," said 47-year-old Adnan, waiting at the U.N.-run Zaatari refugee camp in northern Jordan to sign up his family for the return bus to the Syrian border, about 10 kilometers (6 miles) away. He only gave his first name for fear of repercussions from Syrian authorities.

The U.N. refugee agency views the rising number of departures with concern.

"It is a dangerous choice for people to make," said Andrew Harper, head of the U.N. refugee agency in Jordan. He said the return of refugees, mainly women and children, to war-torn Syria "signals a failure of the international protection regime."

More than 4 million Syrians fled civil war in their country, now in its fifth year. Most settled in Turkey, Lebanon and Jordan, a majority living in urban areas. Banned from working legally, they depend on aid and odd jobs. Recent aid cuts by underfunded agencies, particularly the World Food Program, have been devastating.

In Jordan, more than half a million urban refugees were hit hardest, while about 100,000 living in camps were not affected by the latest cuts.

Adnan and his family fled their village in the province of Daraa on the Jordanian border — birthplace of the 2011 uprising against Syrian President Bashar Assad — more than three years ago. They settled in Ramtha, a Jordanian town just a few miles from Daraa's provincial capital.

The family of 12 lived on food vouchers, while the two oldest sons sold vegetables to cover the rent of $250. Two months ago, all income dried up. The two oldest sons, their 14-year-old brother and a sister headed to Europe — two are already in Sweden and two are still in Turkey — while the family lost all food aid.

"There is no money," said Adnan, who plans to follow his children to Europe as soon as possible.

But the journey costs thousands of dollars, including $400 for a new Syrian passport that enables him to fly to Turkey without a visa, as well as a plane ticket and bribes for the smugglers. Adnan said he can't afford to pay for the rest of the family — his mother, his wife, a six-year-old son, two daughters-in-law and two granddaughters.

On Thursday, he waited outside the U.N. office in Zaatari to register the women and children for return to Syria. The plan is for them to go back to their village of Seel and eventually reach Turkey overland. He shrugged when asked about the risks of travel in Syria, saying he simply had no choice.

The "check-out" takes place in a complex of trailers on the edge of Zaatari. Refugees fill in Jordanian departure forms and are briefed by the U.N. refugee agency. The returnees are cautioned about the risks.

"The road to Europe is very difficult," U.N. registration officer Qusai Tanash told Adnan's wife, suggesting it would be safer for the family in Jordan until they can join the others legally in Europe.

"Family reunification takes a long time," she said, adding that she would stay in Jordan if she could afford it.

Another returnee, 21-year-old Khaled, said he will stay in Syria. "I miss my mother, and I miss my family," he said. Khaled said Jordanian authorities prevented his mother from entering the country. "If my mother was allowed to enter, I wouldn't think to go back to Syria," he said.

In recent months, departures by far outnumbered arrivals, and the outflow is increasing.

About 30 to 75 refugees enter Jordan every day, according to Hovig Etyemezian, the Zaatari camp's director.

The low figures appear linked in part to Jordanian entry procedures. Several recently arrived refugees said they waited three months in a remote desert area on the border, along with several thousand others, before being allowed in. Jordan has said security vetting of newcomers takes time, but has denied large border bottlenecks.

By comparison, 3,853 refugees returned to Syria in August, compared to 1,934 in July, according to U.N. figures.

Harper said August saw the highest number of returns in 18 months — the period during which multiple cross-border trips became largely impossible. He said departures fluctuated in the first half of 2015, but would not provide detailed figures. He said the number of September departures was lower than in August, but did not have the final tally. There was no bus traffic to the border for several days in September because of a major Muslim holiday.

It's not clear how many plan to stay in Syria and how many view it as a way station. Some refugees told U.N. officials they plan to sell property so they can afford the journey to Europe. Others want to stay in their homeland.

Meanwhile, departures from Amman airport to Turkey, often the first leg of the journey to Europe, have increased from 45 in June to 150 in July and 480 in August, said U.N. protection officer Sophie Etzold.

More than 175,000 Syrian refugees from the region took the eastern sea route from Turkey to Greece between January and August of this year, while close to 7,000 traveled from North Africa to Italy, according to the International Organization for Migration. A total of close to 534,000 migrants reached Europe by sea during this period, the IOM said.

Only partial statistics about refugee movements are available from Turkey and Lebanon.

About 94,000 Syrian refugees left Turkey for Syria in the past year, about half returning to Kobani after the ouster of Islamic State militants from the city in early 2015, a Turkish official said, speaking on condition of anonymity in line with government regulations.

The U.N. refugee agency said it believes most of the more than 2 million Syrians in Turkey stay put, largely because living conditions are better than in Jordan and Lebanon.

In Lebanon, the number of registered refugees dropped by 140,000 since January, to 1,078,000. U.N. officials said they don't yet know their whereabouts.

Hundreds of Syrians leave Lebanon daily by ship to Turkey, presumably with Europe as the final destination. Refugees in one district of Beirut said knew families that left for Europe, but none that had gone back to Syria.

A return to Syria is a one-way ticket. None of the three host countries allows multiple border crossings.

Many Syrian refugees in Jordan are from the Daraa region, which has seen sporadic fighting and air raids on rebel-held communities since a failed rebel offensive in the summer.

"A few months ago, we had a family who left from Zaatari camp to a village in Daraa that hadn't been bombed for six months,'" said Etyemezian. "A few days after, that village was bombed and they were injured."