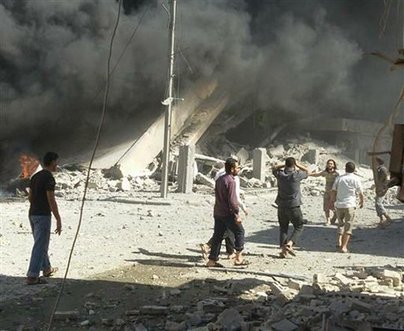 Iran's nuclear deal with world powers has bolstered its central role in efforts to end the spiraling Syrian civil war, bringing Tehran back to the world stage, analysts say.

Though the conflict seems trapped in a military mire -- Russia's air campaign on behalf of Syrian President Bashar Assad being the latest intervention -- Iran is seen as a crucial diplomatic channel.

Along with Russia, the Islamic republic shares a strategic interest in preserving Assad's rule -- contrary to Western demands that he give up power -- as Syria is a gateway to its Lebanese ally Hizbullah.

Iran has given military and financial support to Assad, including sending generals from its Revolutionary Guards as military advisers, several of whom have been killed.

Hezbollah has done much of the fighting to prop up the Syrian military, though the commander of Iran's Quds Force, the Guards' foreign wing, is said to be heavily involved in guiding the military strategy.

However, Iran's Foreign Minister Mohammad Javad Zarif has said there can be no military solution.

He has drafted a four-point peace plan for Syria that calls for a national unity government, a ceasefire, an anti-terrorism effort and constitutional reform.

In a meeting Monday in New York, U.N. Secretary General Ban Ki-moon urged Zarif to pressure Assad toward a peaceful resolution to end the war.

Such dialogue with Iran is a stark change from the U.N.-sponsored Geneva 1 and Geneva 2 international conferences in 2012 and 2014 aimed at finding peace in Syria, when Tehran was not invited.

Francois Nicoullaud, France's former ambassador to Tehran, told AFP that Iran's role in a diplomatic solution for Syria was no longer disputed.

"The Russians are bombing, but we now need now to occupy the land and the Iranians will play a valuable role," he said, indicating the nuclear deal had been a catalyst.

"Iran as a key player in resolving the Syrian crisis is clear in the minds of everyone. The Syrian army is out of breath."

A chasm remains, however, between the thinking of Russia and Iran and that of the United States and powers such as Britain, who have said Assad must agree to an exit from power, even if takes years.

The West says Assad's barrel-bombing of his own civilians means he has lost any legitimate claim to long-term rule.

Iran and Russia, however, say their military cooperation with Assad is about ridding Syria of the Islamic State jihadist group, rather than regime change.

Nicoullaud, who was posted in Tehran between 2001 and 2005, agrees that Iranian and Russia's actions in Syria are an "anti-terrorist" strategy.

"It is a way for them to say something must move in Syria," he added.

The Russian bombing, however, has been widely criticized, including by U.S. President Barack Obama, as adding to the morass in Syria, where America and Arab states have backed rebels fighting Assad's forces.

The rebels have said Russia is targeting them rather than the Islamic State, though Moscow said late Monday it had struck 10 IS targets in Damascus, Aleppo, Homs and Idlib provinces.

Professor Farhang Jahanpour of Oxford University believes the six world powers which struck the July 14 nuclear accord with Iran could now turn their attention to Syria, despite their "geopolitical differences".

"This is by far the wisest course to follow," he told the Tehran Times in an interview, alluding to the links between Assad's Alawite sect, an offshoot of Shiite Islam, and the risks posed by going it alone.

"That scenario would be extremely dangerous for Iran and would split the region further along sectarian lines."