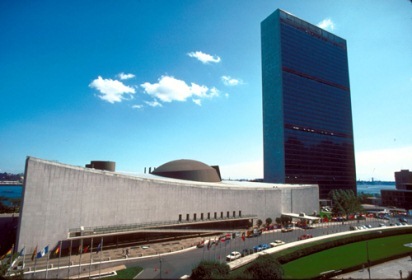 There have been 70 presidents of the U.N. General Assembly, some memorable for their accomplishments, others for their political views, allegations against them, and the reputations of the countries they represent. The arrest of the 68th president, John Ashe of Antigua, in an alleged bribery case has put the spotlight on the presidency of the 193-member world body, which rotates every year by region. Here is a look at eight memorable General Assembly presidents:

Paul-Henri Spaak, Belgium's foreign minister who played an important role in the establishment of the United Nations, was elected the first president of the U.N. General Assembly on Jan. 16, 1946. He went into politics after World War I, when he was taken prisoner by the Germans, and guided the world body during its crucial first year. Spaak went on to be Belgium's prime minister and play a major role in the formation of the forerunner to the European Union, of NATO, and of the customs union of Belgium, the Netherlands and Luxembourg. He was considered Belgium's foremost statesman in the decades after World War II.

Carlos Romulo, a Pulitzer Prize-winning journalist who became a general in his native Philippines during World War II and then a diplomat, was elected the fourth General Assembly president in 1949. He gained notoriety broadcasting freedom messages as a press aide to U.S. Gen. Douglas MacArthur during the war. After his presidency of the assembly, he became a candidate for U.N. secretary-general in 1953 but lost to Dag Hammarskjold. A strong advocate of human rights, Romulo tussled with Soviet diplomats in the mid-1950s. But he spent his last years as foreign minister under Ferdinand Marcos from 1968-1984 defending a regime that critics said had suppressed the freedoms he once stood for.

Vijaya Lakshmi Pandit, the sister of India's independence leader and first prime minister Jawaharlal Nehru, was elected the eighth president of the General Assembly in 1953. An activist in the Indian nationalist movement, she was imprisoned three times by the country's British colonial rulers. With independence, she became a diplomat and was ambassador to the Soviet Union, the U.S. and Mexico. She was the first woman president of the General Assembly.

Abdelaziz Bouteflika, an Algerian who fought against French rule, became the 29th General Assembly president in 1974, while he was foreign minister. Algeria was a strong supporter of the Nonaligned Movement and as assembly president he was criticized by the United States for partisan decisions. In 1981, Bouteflika was sued for allegedly stealing money from Algerian embassies. Two years later he was convicted of fraudulently taking millions of dollars. In 1999, Bouteflika was elected president and in April 2014 he was elected to a fourth term despite not appearing in his own campaign because of the effects of a stroke in 2013.

Jan Eliasson, a veteran Swedish diplomat who is now the deputy secretary-general of the United Nations, was elected president of the 60th General Assembly in 2005. He previously served as the first U.N. undersecretary-general for humanitarian affairs, as Sweden's foreign minister, and as the country's ambassador to the United States and the United Nations. He has been a diplomatic troubleshooter including during the Iran-Iraq war and the disputed enclave of Nagorno-Karabakh.

Miguel d'Escoto Brockmann, a Roman Catholic priest and former Nicaraguan foreign minister during the Sandinista rule of the 1980s, was elected the 63rd president in 2008. He began his post with a "sermon" saying "love is what is most needed in this world" and blaming "selfishness" for "the terrible quagmire in which the world is sinking." His tenure was marked by outspokenness and controversy stemming from his openly leftist views. He railed against the United States, saying it demonized Iran's president, and he compared conditions imposed by Israel on Palestinians to apartheid. He traveled widely as president, reportedly bankrolled by his hosts on at least one trip to Syria, Iran, China, Finland and Bahrain.

Libyan politician Ali Abdessalam Treki was his country's minister for African Union affairs when he became the 64th president in 2009, a time when the late Libyan dictator Moammar Gadhafi was trying to replace his terrorist image and past with that of a revolutionary and world leader. Gadhafi came to the United Nations for the first time that September and Treki introduced him to the assembly as the "king of kings." He spoke for 1 hour and 34 minutes and tore the U.N. Charter. He was supposed to speak for 15 minutes but Treki refused to interrupt him.

Wealthy Ugandan businessman and parliamentarian Sam Kutesa, the 69th president, was elected amid controversy over his support for his country's anti-gay laws and allegations that he abused his office and accepted bribes from foreign companies, which he denied. He kept his job as Uganda's foreign minister during his year-long presidency, raising questions about how he could do two demanding jobs simultaneously.