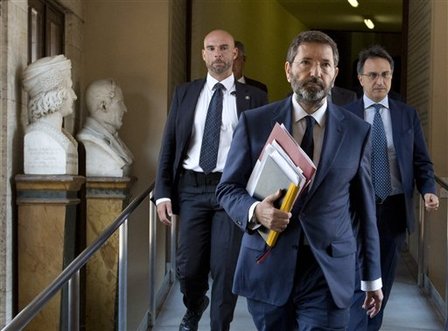 Rome's mayor cried foul on Friday after being forced to resign over an expenses row and warned the Italian capital could succumb once more to organized crime.

Ignazio Marino, 60, stepped down late Thursday over a scandal centered on 20,000 euros ($22,600) of restaurant bills settled with a city hall credit card over the course of his 28 months in office.

He had already been under intense pressure over the pitiful state of the capital, a failing public transport system and a probe into a criminal group led by a one-eyed mobster that had infiltrated the municipality.

"If the bills hadn't turned up, at some point they would have said I wear socks with holes in them or they would have planted cocaine in my pockets," Marino said in an interview with La Stampa daily.

In a video posted on Facebook by the former surgeon -- widely considered to be honest but bumbling and unpopular -- said he feared the return of graft.

"I cannot deny the great fear that past mentalities and the machinery of mafia will immediately return to (city) government," he said.

His supporters suspect a concerted smear campaign linked to Marino's role in exposing a criminal network with links to the far right which had thrived under his predecessor.

Police dismantled the "Mafia Capitale" network last year and dozens of local politicians and businessmen suspected of rigging tenders and siphoning off millions of euros destined for public services are due to go on trial next month.

Marino, who was rejected by his own center-left Democratic Party, says the nail in his coffin was a bid to clean up city corruption by ending all public contracts without tender.

Rome's prefect Franco Gabrielli will step into his shoes for at least a month, pending elections which could take place early next year. At the moment, the anti-establishment Five Stars movement is the favorite.