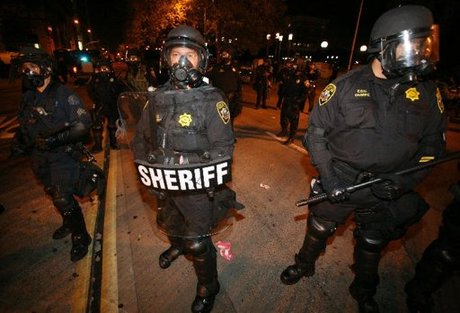 Four U.S. men were arrested on Tuesday for plotting to attack government workers and official buildings, and for trying to manufacture the deadly biological toxin ricin, authorities said.

"These defendants, who are alleged to be part of a fringe militia group, are charged with planning attacks against their own fellow citizens and government," said Sally Quillian Yates, U.S. Attorney for the Northern District of Georgia.

"To carry out their agenda, two of the defendants allegedly purchased purported explosives and a silencer, while the other two defendants took steps to attempt to produce a deadly biological toxin," she said in a statement.

The accused men, all from Georgia, were named as Frederick Thomas, 73, of Cleveland; Dan Roberts, 67, of Toccoa; Ray Adams, 65, of Toccoa; and Samuel Crump, 68, also of Toccoa.

According to the criminal complaint, which named the toxin as ricin, Thomas, Roberts, Crump and Adams "began participating in clandestine meetings of a fringe 'covert' operations team" in March this year.

They discussed criminal activities including murder, theft, manufacturing and using toxic agents, and assassinations in an effort to undermine federal and state government and to advance their interests, the statement said.

The group's meetings were monitored by the FBI whose confidential source was present and had covertly recorded the discussions.

"In March and April 2011, Thomas, Roberts, Adams and others attended meetings where participants discussed targeting various government officials, including employees of federal agencies such as the Internal Revenue Service."

The complaints also allege that Thomas and Roberts talked about the need to obtain unregistered silencers and explosive devices for use in attacks against federal government buildings and employees, and local police.

"Thomas, Roberts and others also discussed the use of the biological toxin that can kill individuals in small doses," the statement said.

"The participants acknowledged that these actions would constitute murder but reasoned that the actions were necessary in accordance with their ideology."

The four were due to make their initial appearance in court on Wednesday.